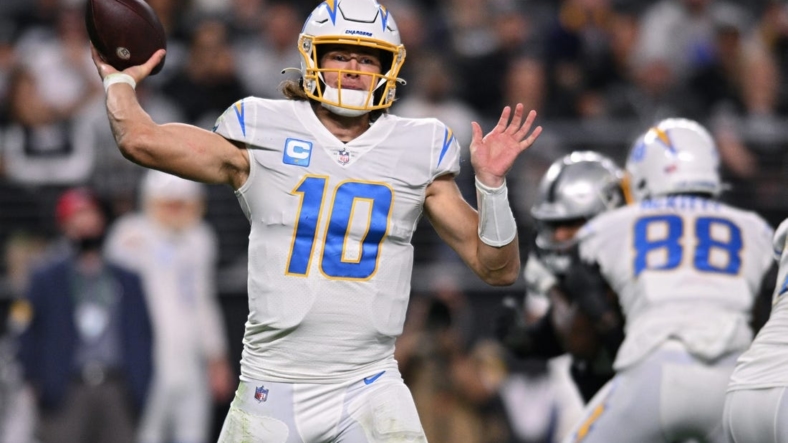 Josh McDaniels makes his return to the AFC West on Sunday, and he might not like what they’ve done with the place.

McDaniels and the Las Vegas Raiders visit the Los Angeles Chargers in a matchup of division rivals to open the 2022 regular season in a quick repeat of last season’s finale. The Raiders scored an overtime win, 35-32, to end the 2021 regular season with a playoff berth on the line.

“They’ve earned the right to be excited. No doubt. They’ve put in all the work,” said McDaniels, in his first season as Raiders head coach. “I think there’s a difference between being excited to play and compete and going overboard and then wearing yourself out because look, there’s no question that the energy and excitement that you feel can take its toll on you if you’re too far past the line.

“We’ll try to contain it I think is a better word and just try to funnel it towards Sunday.”

McDaniels, in his second stint as head coach after previously running the Denver Broncos, takes the reins of a remade Raiders roster thickened with a series of splashy moves, the most significant being acquiring All-Pro wide receiver Davante Adams.

Though he had to live with failed risks in the season-ending loss to the Raiders all offseason, Brandon Staley went 9-8 in his debut season as head coach in 2021 and his Ted Lasso-level optimism might be warranted. The Chargers’ offseason moves focused on a defense that didn’t generate enough pressure on quarterbacks.

“There is a vibe that we have the right blueprint, the right people,” Staley said Wednesday when asked about the “new energy” his players have mentioned this summer.

There was nothing wrong with the Chargers’ offense, which averaged 27.9 points per game in 2021. Quarterback Justin Herbert was second in the NFL with 5,104 passing yards and third in the league with 38 TD passes, but even putting up 60 points in two games against the Raiders last season only was good for a split.

Chargers general manager Tom Telesco traded for Bears linebacker Khalil Mack to play the pass-rush spot on the left side of the 3-4 defense opposite Joey Bosa, who had 10.5 sacks last season. The Chargers also paid big money for top cover cornerback J.C. Jackson (Patriots) in free agency, sliding him into a secondary anchored by safety Derwin James.

“There’s no shortcuts. It’s not easy,” McDaniels said of preparing for the Chargers. “They have a tremendous amount of talent.”

Jackson, likely to be assigned Adams on Sunday if cleared, is day-to-day recovering from a foot operation on Aug. 24 but only recently shed his walking boot, Staley said.

The Chargers allowed 27 points per game last season, when stopping the run was also an issue. Bosa said he has been encouraged that the Chargers did more than make moves and found “the right guys.”

“Every year, we’ve had pieces and this and that, but I think it’s finally time where we feel like we can make a push,” Bosa said. “Those kinds of periods don’t last for that long. Every team is up and down. There aren’t too many dynasties where teams are staying together and playing for 10 years at a time or whatever. I think it says a lot and it shows how serious they are about winning.”

The task Sunday is slowing the reunited Fresno State pitch-and-catch tandem of Derek Carr and Adams, who was second in the NFL last season with 123 receptions in what turned out to be his final season with the Packers.

McDaniels’ Raiders are also loaded with other new faces while moving forward after a tumultuous 10-7 season that included a playoff appearance, the firing of disgraced coach Jon Gruden and the release of wide receiver Henry Ruggs for his involvement in a fatal car accident.

Sunday is the debut of the Raiders’ new pass-rush pairing, too.

Defensive end Chandler Jones was added in free agency and Maxx Crosby signed a nearly $100 million extension in the offseason. Crosby had two sacks in the 2021 finale to help the Raiders hit the postseason.

The Chargers have won two of the past three meetings. The Raiders lead the all-time series 66-56-2.