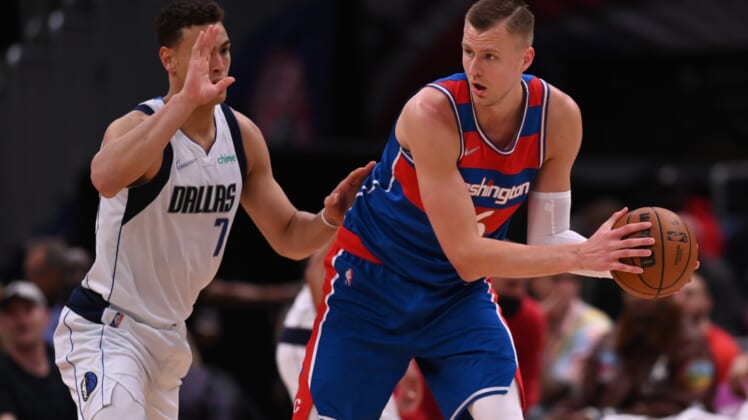 Kentavious Caldwell-Pope scored a season-high 35 points, Kristaps Porzingis added 24 points, nine rebounds and four assists against his former team, and the Washington Wizards cruised to a 135-103 rout of the visiting Dallas Mavericks on Friday.

Caldwell-Pope, who shot 6-of-11 from 3-point range, set the tone for the night when he scored the first five points. Porzingis, who was traded to Washington from Dallas in February, added eight points in the game’s first 5:27, and the Wizards were off to the races.

They never trailed and led by as many as 34 points en route to the fourth win in their last five games.

Washington shot a blistering 17-of-33 from beyond the 3-point arc, part of a 54.4 percent shooting effort from the floor.

Rui Hachimura went 3-of-4 from deep and finished with 21 points to match a season high. Deni Avdija went 3-of-5 behind the arc coming off the bench to finish with 14 points, and Porzingis shot 2-of-4 from long range.

For Porzingis, Friday marked the fourth game in the last five he has scored at least 23 points. Caldwell-Pope’s outpouring, meanwhile, was his fourth consecutive game scoring at least 20 points.

Dallas’ winning streak ended at three games as it failed to recover from its sluggish start in the second game on a four-game road swing. The Mavericks shot 43.6 percent from the floor (28.9 percent from long range) and committed 13 turnovers.

Luka Doncic was responsible for five of the Mavericks’ giveaways, although he led all scorers with 36 points. He also recorded seven rebounds and six assists.

Jalen Brunson was the only other Dallas scorer in double-figures with 21 points. Spencer Dinwiddie — part of the trade that sent Porzingis to Washington — finished with eight points, as did teammates Dwight Powell, Reggie Bullock and Dorian Finney-Smith.

Ish Smith scored 12 points and dished a game-high nine assists for the Wizards.