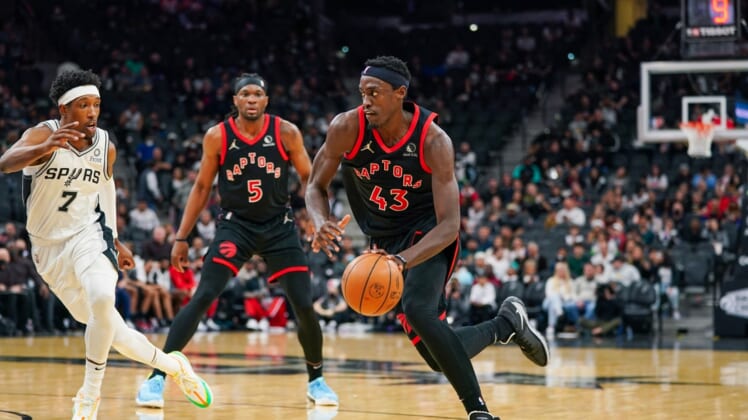 The Toronto Raptors can assure themselves of a winning record on their six-game trip with a victory over the Los Angeles Lakers on Monday night.

After defeating the league-leading Phoenix Suns on Friday and the Denver Nuggets on Saturday, the Raptors have won three in a row. They dropped the opener of the trip to the Cleveland Cavaliers on March 6.

The trip will end Wednesday against the Los Angeles Clippers.

The Raptors had a day off on Sunday, while the Lakers lost to the host Suns 140-111.

“Nothing we did tonight was good enough,” Lakers coach Frank Vogel said. “Our defensive focus wasn’t where it needed to be.”

The Raptors overcame an eight-point deficit with 10:30 to play in the fourth quarter on Saturday by going on a 9-0 run that sent them toward a 127-115 victory over the Nuggets.

The Nuggets had 19 turnovers against the hard-working Raptors, who were without OG Anunoby (finger), Fred VanVleet (knee) and Malachi Flynn (hamstring). VanVleet did play on Friday at Phoenix.

“We’re relentless,” said Pascal Siakam, who scored 33 points on Saturday. “And we just want to continue to compete and get better as a team.”

Scottie Barnes had 25 points and 10 rebounds, Chris Boucher added 21 points and 13 rebounds off the bench, and Precious Achiuwa had 15 points. Toronto outscored Denver 34-16 in the fourth quarter.

“We dropped down by eight, and it looked like we had thrown our best punches,” Raptors coach Nick Nurse said. “We stuck right in there, and we answered that run, similar to (Friday), showing a lot of character. I like that we showed a lot of toughness these past two nights, and that takes you a long way, playing tough.”

The Raptors, who are in seventh place in the Eastern Conference, started their winning streak Wednesday against the San Antonio Spurs. They are a game behind the Cleveland Cavaliers for the final guaranteed playoff spot in the conference.

“These games are important,” Siakam said. “We’ve got to come in with a focus and an intensity. And we know when we do that, we always give ourselves a good chance to be in the game against any team. I think that’s kind of like the takeaway from (Saturday).”

This will be the first meeting between the Lakers and Raptors this season. They are scheduled to meet again Friday in Toronto.

The Lakers are led by veterans James, Carmelo Anthony, Russell Westbrook and the injured Anthony Davis (foot), but they are brining younger players into the fold.

Malik Monk, Talen Horton-Tucker and Austin Reaves are contributing for the Lakers, who are in ninth place in the Western Conference..

“Those guys are talented guys,” Vogel said. “They’ve continued to improve and get better and more comfortable in our system, in our environment. … Malik, Austin and Talen. That trio is another reason amongst others why I believe we have a chance.”

The younger players have the confidence of James.

“I expect those guys to make plays because they’re on the floor and I know what they’re capable of,” he said. “I know what Malik is capable of. Obviously, I’ve been in the foxhole with THT, and Austin has proven himself.”

Monk had 13 points Sunday against the Suns while Reaves had 10 points and Horton-Tucker three.