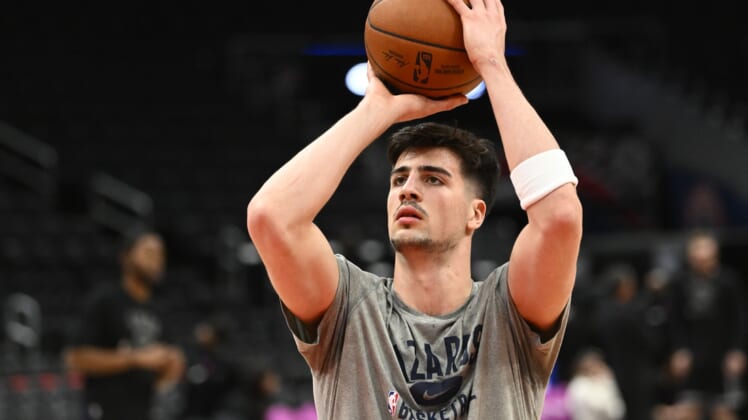 Last week’s trade deadline appears to have invigorated the Washington Wizards, who visit the Indiana Pacers on Wednesday.

Kyle Kuzma scored 23 points and Deni Avdija recorded his second double-double of the season with 12 points and a career-high 15 rebounds in a 103-94 win over the Detroit Pistons on Monday.

The Wizards held the Pistons scoreless for more than four minutes late in the fourth quarter to secure the win.

“We needed a change. It’s a process. It’s going to take some time, and I believe in this team.”

Washington acquired Kristaps Porzingis at the trade deadline, but the 7-foot-3 center is dealing with a bone bruise in his right knee and has yet to make his Wizards debut.

“He’s doing a little bit more every day on the floor,” Washington coach Wes Unseld Jr. said. “That’s a positive sign, but we still have to be cautious with it. When the time’s right, he’s ready.”

Porzingis will sit out Wednesday’s contest along with center Daniel Gafford, who has cleared the NBA’s health and safety protocol but is working on his conditioning.

Washington has split its first two meetings this season against Indiana. The Pacers are riding a seven-game losing streak after falling 128-119 to Giannis Antetokounmpo and the Milwaukee Bucks on Tuesday.

Antetokounmpo scored a season-high 50 points in the win over Indiana, which had just 10 players available due to injuries.

One bright spot was the play of recent arrivals Buddy Hield and Tyrese Haliburton. Hield scored a season-high 36 points in the loss while Haliburton had 17 points and eight assists.

“Those two guys played very well,” Pacers coach Rick Carlisle said. “I love the way we’re playing right now from the standpoint of ball movement with a lot of unselfish play. That’s what we’ve got to continue to do going forward.

“But look, we’ve lost seven games in a row, so I’m not going to sit here and say that things are going great. We’re in a tough stretch right now.”

The limited roster has resulted in more playing time for third-year pro Oshae Brissett, who averaged 20 points in two games before scoring six points in 27 minutes against Milwaukee.

Hield was 14 of 20 shooting on Tuesday, including 8 of 12 from 3-point range. The career 40 percent 3-point shooter is averaging 21.7 points in three games since being acquired from the Sacramento Kings at last week’s trade deadline.