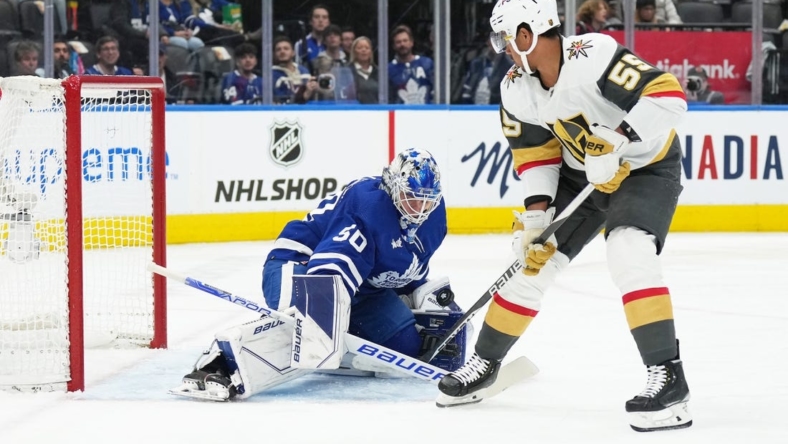 Smith, who tied the game with a short-handed goal in the third period, was put into the clear by Shea Theodore for the winning goal.

Logan Thompson made 28 saves for the Golden Knights, who were playing the fourth game of a five-game road trip.

Timothy Liljegren scored his first two goals of the season and Mitchell Marner added a goal and an assist for the Maple Leafs, who had a three-game winning streak end. Erik Kallgren stopped 16 shots.

Roy scored his fourth goal of the season 45 seconds into the first period on a tap-in at the end of William Carrier’s rush to the net. Rasmus Sandin’s turnover at the Vegas blue line started the rush.

Liljegren, playing his third game of the season, scored from the right circle at 5:05 of the first. David Kampf and Zach-Aston Reese earned assists. Morgan Rielly barely kept the puck from going over the blue line, preventing an offside that would have negated the play.

Eichel scored his sixth goal of the season at 17:55 of the first, completing a precise passing play with Mark Stone and Chandler Stephenson. Liljegren’s turnover led to the goal.

Toronto tied the game at 13:50 of the second period. Marner worked the puck from a scrum on the left boards with some deft moves before scoring his third goal of the season from the slot.

Liljegren scored his second goal at 16:56 of the second on Marner’s smart set up. Rielly also had an assist.

Toronto led 22-13 in shots on goal after two periods.

Vegas tied the game with Smith’s short-handed goal at 11:43 of the third period. It was Smith’s sixth goal of the season. Karlsson and Brayden McNabb earned assists.