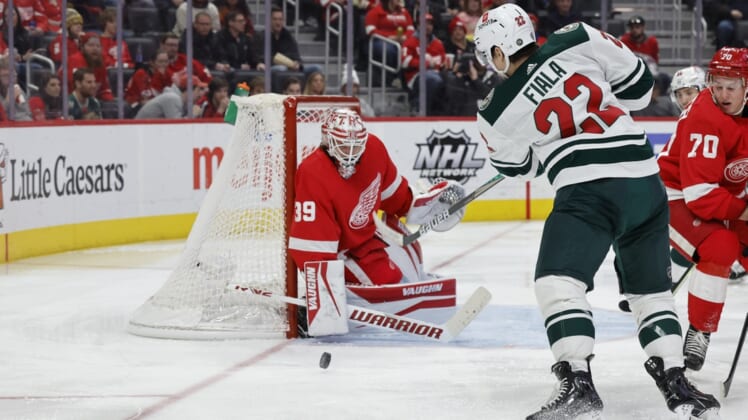 The Minnesota Wild seem to have successfully regrouped following a rough 2 1/2-week stretch.

Looking to win three in a row for the first time since early February, the visiting Wild will try to keep the sagging Blue Jackets winless for a season-high fifth consecutive game on Friday night.

Sitting second in the Western Conference in wins after a victory on Feb. 14, Minnesota then dropped eight of 10 from Feb. 16-March 6. Since then, however, the Wild managed a 5-2 victory over the New York Rangers on Tuesday and rallied for a 6-5 shootout win at Detroit on Thursday.

Minnesota trailed 4-2 early in the second period against the Red Wings, but fought back for their NHL-leading seventh victory after facing a two-goal deficit. The Wild last won three straight during a six-game run from Jan. 21-Feb. 2.

“I think it showed (Thursday night) that we’re getting back to playing the way we need to play,” Wild forward Kevin Fiala, who scored the shootout winner and has three goals with five assists during a five-game point streak, told the NHL’s official website.

“We have some areas where we need to get better, but I think we’re going to be better going forward.”

While Minnesota has totaled 50 goals over the last 13 games, it has allowed 60, an average of 4.6 during the same stretch. The Wild’s Cam Talbot stopped 29 of 34 shots on Thursday, but managed to win his third consecutive start.

With this back-to-back scenario, however, Kaapo Kahkonen, who has a 4.43 goals-against average during a four-game losing streak, could get start in the Wild net on Friday.

Offensively, Matt Boldy continued to shine Thursday with his second multiple-goal game. Boldy, who will turn 21 next month, has 11 goals with 12 assists in his first 25 NHL games since debuting on Jan. 6.

He’s just another concern for the Blue Jackets, who rank near the bottom of the league in allowing an average of 3.7 goals. Following Thursday’s 6-0 loss to the New York Islanders, Columbus has yielded 20 goals during its current 0-2-2 rut.

“It’s just important that we stay focused on each and every game here. And, try to just pour it all into that game.”

After missing nine games with a lower-body injury, Joonas Korpisalo stopped 27 of the 33 games he faced on Thursday for the Blue Jackets. Meanwhile, Elvis Merzlikins could be back in the Columbus net, looking to end an 0-1-2 rut. Merzlikins has a 4.10 goals-against average while amid a 2-3-2 starting stretch.

Prior to be shutting out for the fifth time this season, the Blue Jackets scored four goals in three of their previous four contests. However, Boone Jenner, Columbus’ leader with 44 points, has totaled just one in the last four games.

He has recorded only two points in 11 career games against the Wild.

Minnesota has won the last three meetings with Columbus, but these teams haven’t met since Feb. 28, 2020.