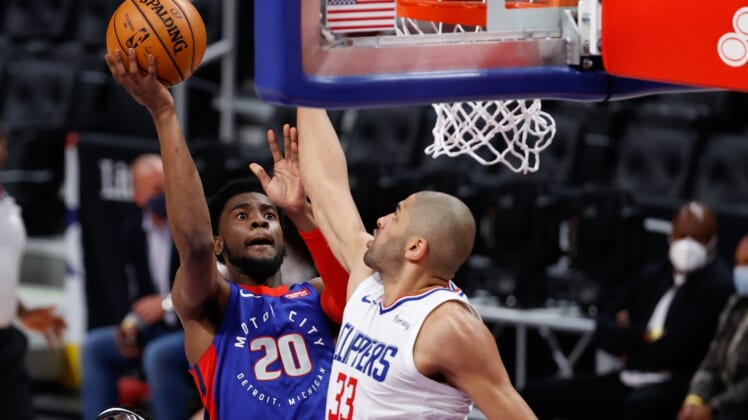 Reggie Jackson hit a go-ahead 20-foot jumper with 2.8 seconds left and the Los Angeles Clippers rallied from an 11-point deficit in the final five minutes and extended their winning streak to seven games with a 100-98 victory over the Detroit Pistons on Wednesday.

Both of the Clippers’ star forwards missed the game. Kawhi Leonard sat out for the third straight contest with right foot soreness.

Paul George was rested on the second game of a back-to-back. He scored 36 points in an 11-point victory at Indiana on Tuesday.

Jerami Grant, who missed the previous three games due to a sore right knee, led Detroit with 28 points. Saddiq Bey supplied 17 points for the Pistons, who were defeated by the Clippers in Los Angeles 131-124 on Sunday.

Isaiah Stewart tossed in 12 points and grabbed eight rebounds for Detroit, which played its first home game since April 3.

Zubac had 16 first-half points as the Clippers led 53-49 at halftime. Kennard and Jackson had 11 points apiece, while Grant topped Detroit with 14 points. Neither team had much success on the perimeter, as they combined to make 7 of 28 3-point attempts.

Grant scored 10 points in the first five minutes of the second half, including five free throws, to give his club a 62-59 lead.

Killian Hayes made a layup and Wayne Ellington converted a turnaround jumper to give Detroit a 77-69 advantage. Nicolas Batum answered with a four-point play to cut the Pistons’ advantage in half before the quarter ended.

Stewart’s inside basket with 6:59 left gave Detroit an 86-80 advantage. Bey followed with a 3-pointer for a nine-point lead.

Los Angeles crept within five with the aid of a Jackson 3-pointer.

A Zubac putback in the final minute made it 96-93. Mason Plumlee made two free throws to give Detroit some breathing room.

The Clippers responded with a Mann dunk and a Jackson 3-pointer after a Pistons turnover to tie it at 98 with 19 seconds left.

Bey committed a turnover on an inbound pass. Jackson then hit his game-winner over Hayes, who missed a 3-point attempt at the buzzer.