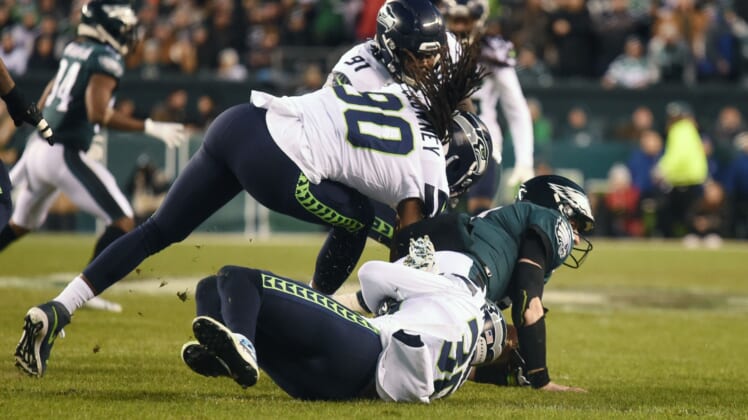 Carson Wentz took a helmet-to-helmet hit from Jadeveon Clowney early in Sunday’s wild-card game that ultimately knocked him out of the contest with a concussion.

The play itself was controversial, as Clowney led with his head, spearing Wentz in the helmet as the other side of his head hit the turf hard (watch here). No flag was thrown, and after the game referee Shawn Smith was asked about the play.

Per the pool report, via Les Bowen of The Philadelphia Inquirer, Smith said he felt the helmet-to-helmet Clowney hit on Wentz was “incidental,” which is why no flag was thrown.

Wentz was clearly disoriented and ultimately was escorted back to the locker room for further evaluation. He was ruled out with a head injury as the Eagles took the field for the second half.

You’d be hard pressed to find any Eagles fan, or player for that matter, that would agree with that “incidental” evaluation. In fact, it’s clear at least one of the Eagles players pointed out a disparity between that non-call and a penalty Seahawks quarter back Russell Wilson benefited from during the same game.

You have to hand it to the Eagles for fighting like mad to stay in Sunday’s game against Seattle after Wentz went down. Josh McCown played his butt off and did all he could, to the point of playing through what was clearly a painful injury.

In the end, the Eagles were just too injury ravaged to advance.