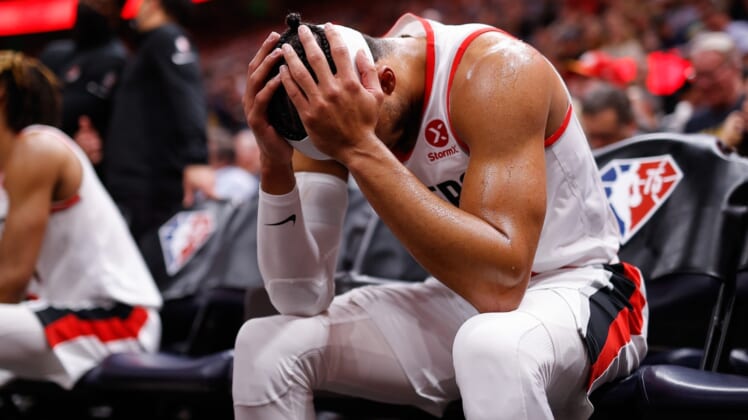 The Portland Trail Blazers are mathematically alive for the Western Conference’s final play-in berth, but realistically, they appear headed for the NBA’s draft lottery.

The Trail Blazers have lost three straight games by an average of 24.3 points and dropped 13 of their past 15 games entering Monday night’s home contest against the downtrodden Oklahoma City Thunder.

Portland (27-47) hasn’t put up much of a fight in the first three contests of a five-game homestand. The Trail Blazers were walloped 133-96 by the San Antonio Spurs on Wednesday and then dropped back-to-back games to the lowly Houston Rockets by an average of 18 points.

Houston entered the two-game set with the worst record in the NBA but easily outplayed and outworked Portland.

The Trail Blazers never led and trailed by as many as 24 during Friday’s 125-106 loss to the Rockets. The score was tied at halftime of Saturday’s rematch before Houston outscored Portland 55-38 in the second half to post a 115-98 win.

“It was a much better start than we’ve had in the last two games,” Trail Blazers center Drew Eubanks said afterward. “Just got a couple of lapses in our principles, in our defense in the second half and they got some wide open shots where guys shouldn’t even be that open. It’s tough right now this time of the year when games are so close together. We don’t have time to practice.”

The trio of setbacks left Portland four games behind the New Orleans Pelicans entering Sunday’s play. The Pelicans have a one-game edge over the San Antonio Spurs for the final play-in spot.

The Trail Blazers host the Pelicans on Wednesday to end the homestand.

Portland sustained a blow in Friday’s loss when forward Trendon Watford hyperextended his left knee with 3:01 left in the contest. An MRI exam detected a bone contusion to his left femur and Watford will be re-evaluated in one week.

Watford had been a recent bright spot for the Trail Blazers. He’s averaging 15.4 points, 6.7 rebounds and 3.4 assists this month.

Oklahoma City (21-53) has its own injury issues to deal with. Leading scorer Shai Gilgeous-Alexander (ankle) has missed three of the past four games and the Thunder are considering shutting him down for the season.

“We’re going to have a conversation with him here in the next couple of days to discuss the rest of the year because the game-to-game is not sustainable, in terms of just in or out on the nightly basis,” Thunder coach Mark Daigneault said of the player averaging 24.5 points in 56 games. “We’re obviously running out of games here.”

The Thunder had just nine available players against Denver as they lost for the 11th time in the past 12 games.

Six players scored in double digits, led by Theo Maledon’s 20 points. Maldedon is averaging 22.5 points over the past two games.

“It’s just even more exciting to get an opportunity when the odds are against us to be there and come in, compete, prove ourselves,” Maledon said afterward. “We take pride in that and I think the organization takes pride in that overall.”

Oklahoma City is looking for its third win this season against the Trail Blazers. The Thunder cruised to a 98-81 home win on Jan. 31 and posted a 96-93 victory in Portland on Feb. 4.