Reds use long ball to get by Nats 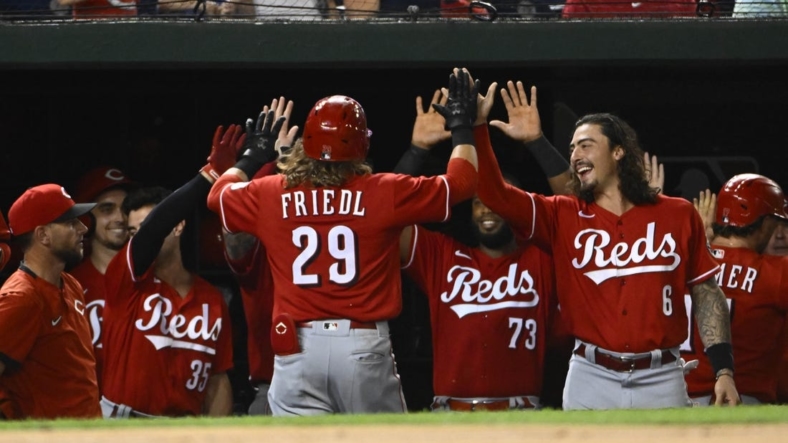 TJ Friedl hit a tiebreaking three-run home run in the sixth inning to lift the Cincinnati Reds to a 6-2 victory against the host Washington Nationals on Saturday night.

After Jonathan India flied out, Kyle Farmer singled and Donovan Solano doubled ahead of Friedl’s heroics. Two batters after his second blast of the season, Colin Moran homered to stretch the lead to 5-1.

Friedl went 3-for-4 and Farmer also homered for the Reds, who have won two in a row after a four-game skid.

Lane Thomas homered to account for Washington’s first run and Luke Voit’s single in the eighth drove in the other after Joey Meneses’ two-out double. Thomas and Meneses both ended up with two hits. The Nationals have lost five of their last six games.

Ian Gibaut (1-0), making his 19th relief appearance since joining the Reds earlier this season, was the winning pitcher with two shutout innings. He was the first of four Cincinnati relievers used. Alexis Diaz notched his sixth save with 1 1/3 innings.

Reds starter Luis Cessa, bidding for his first win since June 14, lasted four innings in making just his third start in 39 appearances this year. He had completed two innings only twice this season.

Nationals starter Paolo Espino (0-6) was charged with three runs in 5 1/3 innings, though he departed with the score knotted at 1-1. Reliever Jake McGee gave up the two Cincinnati homers in the sixth.

Farmer’s homer with two outs in the first inning opened the scoring. It was his eighth home run of the season. Thomas matched it with a solo shot in the second, giving him 13 home runs.

India tacked on an RBI double in the top of the ninth to push the score to 6-2.

Farmer and Jake Fraley each had two hits for the Reds, who racked up 12 as a team.