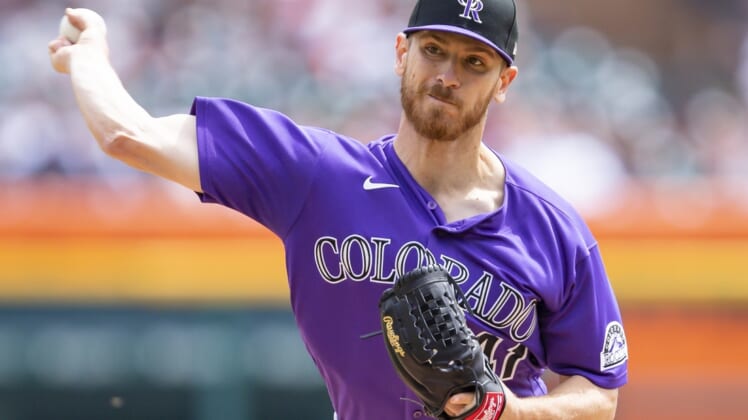 Colorado Rockies right-hander Chad Kuhl will look to continue a stellar beginning to the season when he takes the mound against the visiting Cincinnati Reds on Saturday night.

Kuhl (2-0, 1.10 ERA) has allowed just eight hits and two runs while striking out 13 and walking seven in 16 1/3 innings through three starts. He hasn’t allowed more than four hits in any outing.

In his most recent appearance, he gave up four hits and a run in six innings during a 6-2 win over the Detroit Tigers on Sunday.

Kuhl, who played five seasons with the Pittsburgh Pirates before signing with Colorado as a free agent in March, is 2-3 with a 3.80 ERA in 10 career appearances, including eight starts, against the Reds. He compiled 50 strikeouts and 22 walks over 42 2/3 innings during those games.

One of the biggest reasons Kuhl has been successful this season has been his ability to keep the ball in play. Entering the year, he had allowed an average of 1.2 home runs per nine innings.

Kuhl has yet to serve up a home run or a triple this year. He has allowed just one double, and opponents are hitting .145 against him.

“I’m surrounded by good people,” he recently told Rox Pile. “They’ve made it super easy on me. Obviously, this is a (starting pitching) staff that has been together for a good while, so they’re all familiar with each other. To fit in, they’ve been super welcoming.”

On Saturday, Kuhl will be opposed by Cincinnati right-hander Connor Overton, who will make his season debut. Overton will fill the spot in the rotation vacated by Nick Lodolo, who was placed on the 10-day injured list due to a lower back strain.

Overton struck out 22 and walked two over 19 innings for Triple-A Louisville this season, going 2-1 with a 2.84 ERA.

“I’ve been feeling good the last couple of starts,” Overton said. “I feel like I’m ready to go and show these guys what I can do up here.”

Overton signed a minor-league deal with the Reds in November. He was waived by the Toronto Blue Jays in September and finished last season with the Pirates.

The Rockies ended a four-game losing streak on Friday with a 10-4 rout of the Reds, who lost their fourth game in a row. Cincinnati has dropped 17 of its 20 games and is off to its worst start since the team was 3-18 in 2018.

That was more than enough for Colorado starter Antonio Senzatela (2-1), who allowed one run on seven hits with two walks and a strikeout in 6 1/3 innings.

Colorado’s C.J. Cron went 2-for-2 with a run, an RBI and three walks. Elias Diaz, Randal Grichuk, Jose Iglesias and Connor Joe each had two hits for the Rockies, who saw every hitter besides Sam Hilliard, who went 0-for-3 with two walks, record at least one hit.

Tommy Pham went 4-for-5 with two RBIs and a run while Jonathan India had a three-hit game for the Reds.

The Rockies were helped by turning four double plays.

“There are such things as defensive slumps, too,” Colorado manager Bud Black said. “We had one as a team. There’s no doubt about it. We broke out of that today with four double plays.”