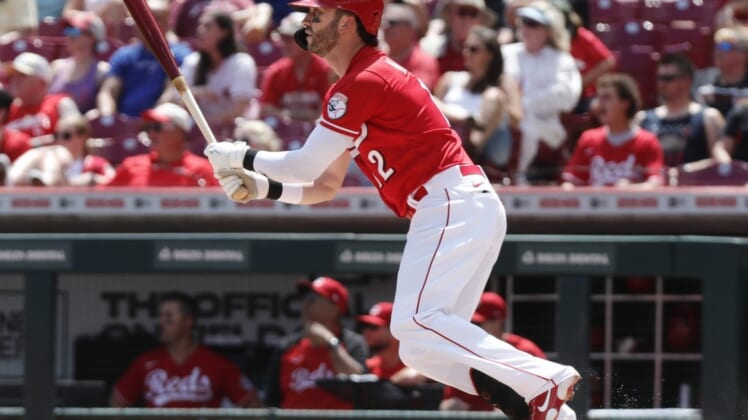 Mike Moustakas drilled his 200th career home run as part of a seven-run outburst in the third inning as the Cincinnati Reds routed the visiting Tampa Bay Rays 10-5 Sunday to complete a three-game sweep.

Jonathan India and Tyler Stephenson also homered for the Reds, who won their fourth straight, earned their first three-game sweep of the season and finished their 11-game homestand 6-5.

Yandy Diaz had three hits, including a two-run single, for the Rays, who finished their 11-game road trip 5-6 and fell to 5-13 all-time against the Reds in interleague play.

Cincinnati starter Nick Lodolo (2-2) worked out of a first-and-third jam with none out in the first inning.

The Reds then unloaded on Tampa Bay starter Shane Baz (1-2) for seven runs in the third with three home runs, chasing Baz from the game after just 2 1/3 innings.

India connected for a two-run homer to the first row in left to get the rally started. Stephenson and Moustakas followed with two-run homers of their own as Baz allowed more home runs in the third inning than he had in his five previous appearances of the season.

Moustakas was 3-for-28 in July before the milestone homer, a line drive halfway up the bleachers in right field that put Cincinnati ahead 7-0.

The Rays responded immediately against Lodolo, who labored through a 41-pitch, three-run fourth, highlighted by Randy Arozarena’s leadoff homer to center. Lodolo allowed a leadoff double to Arozarena in the fifth but stranded the runner.

After the Rays cut the Cincinnati lead to four, the Reds answered with three more in the fourth. Tyler Naquin doubled home two runs and Donovan Solano scored Naquin on a single.

The Rays played the game without two of their regulars as both infielder Wander Franco (right wrist) and center fielder Kevin Kiermaier (left hip) were injured Saturday and placed on the injured list before the game.