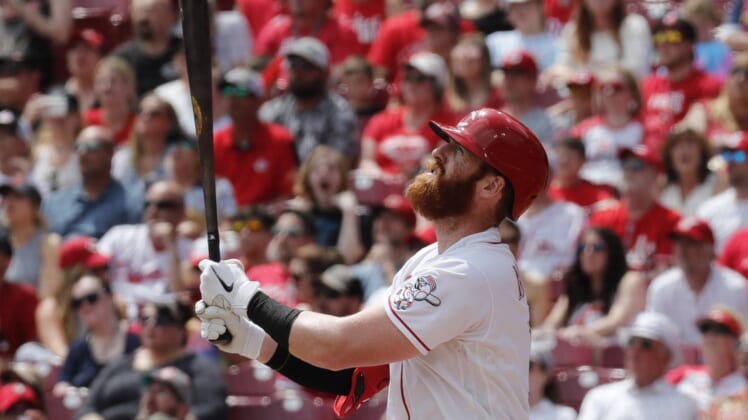 Rookie left-hander Nick Lodolo allowed one run on five hits over 5 2/3 innings and Colin Moran drove in two runs as the Cincinnati Reds ended an 11-game losing streak with a 4-1 victory over the visiting St. Louis Cardinals on Sunday.

Lodolo (1-2) had seven strikeouts and no walks in earning his first major-league victory. The Reds scored three runs in the first two innings against Cardinals starter Adam Wainwright (2-2).

The Reds ended their longest losing streak since they dropped 11 straight from May 16-27, 2016.

Cincinnati took a 2-0 lead in its first at-bat. Moran opened the scoring when his sacrifice fly scored Tyler Naquin, who had led off with a double. Nick Senzel followed by singling home Tommy Pham, who had reached on a walk, advanced to second on a walk, and reached third on Moran’s sacrifice fly.

The Reds extended their lead to 3-0 in the second when Alejo Lopez scored on Naquin’s groundout to shortstop.

After the Cardinals cut the lead to 3-1 in the sixth when Tyler O’Neill’s double to left-center field scored Paul Goldschmidt, the Reds countered in their half of the inning.

After Pham doubled to left and advanced to third on Wainwright’s wild pitch, Joey Votto walked. Moran followed with a single to right that scored Pham for a 4-1 lead that bright Wainwright’s outing to a close.

He threw 94 pitches but just 58 strikes before he was relieved by T.J. McFarland, who kept the Reds scoreless for the next two innings.

While Wainwright struggled to find the strike zone, Lodolo had no issues, as 57 of his 79 pitches were strikes.

Relievers Tony Santillan and Art Warren kept the Cardinals scoreless for the next 2 1/3 innings before Lucas Sims retired the side in order in the ninth for his first save of the year.

Pham and Senzel each had two hits for the Reds, while Goldschmidt and Harrison Bader had two hits apiece for St. Louis.