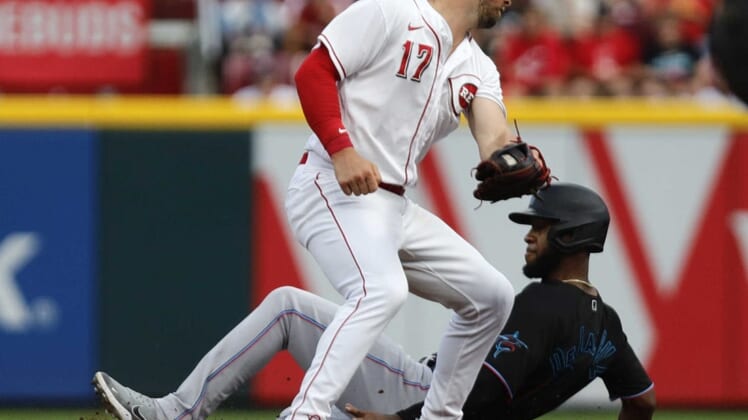 All eyes will be on Luis Castillo on Wednesday as he takes the mound for what could be one of his final appearances with the Cincinnati Reds against the visiting Miami Marlins in the third of a four-game series.

With the Aug. 2 Major League trade deadline quickly approaching, rumors continue to swirl around Cincinnati’s ace right-hander, considered one of the prime pitchers on the trade market.

Castillo (3-4, 2.77) hasn’t started a game since July 14 when he held the New York Yankees to two hits and one run over seven innings at Yankee Stadium.

Five days later, at the All-Star Game in Los Angeles, Castillo threw a perfect fifth inning in relief for the National League, striking out two.

Adding to his potential trade value, Castillo has been getting stronger in the last two months after starting the season on the injured list with a sore right shoulder. Castillo is 3-3 with a 2.37 ERA in his last 11 starts, including nine quality starts. The Reds have won all three of Castillo’s starts in July.

Reds manager David Bell acknowledged the fact that trade rumors will only intensify as Aug. 2 approaches.

“(It’s) about being in the moment and playing the game and making the most of every day,” Bell said of trade deadline distractions. “Truly, it is out of our control as a player. It’s really an opportunity to kind of double down on all the things that you have to do anyway to be a successful major league player or team.”

The Marlins counter with left-hander Braxton Garrett (2-3, 3.42), making the 10th start of the season.

In his second consecutive start against Pittsburgh last Friday, the 24-year-old struck out seven batters and allowed one run on two hits in six innings to earn his second win of the season.

In four July starts, hitters are batting just .131 with five extra-base hits against Garrett, who will be facing the Reds for the first time in his career.

The Marlins placed first baseman Garrett Cooper on the 10-day injured list Tuesday with a bruised right wrist, retroactive to Sunday. Cooper left Saturday’s game in Pittsburgh after being hit by a sinking fastball while pinch-hitting in the eighth inning. The pitch struck Cooper in the spot where he had surgery in 2018.

“I’m happy it’s not longer than 10 days,” Cooper said. “(I’m) thankful and grateful it wasn’t anything serious. MRI, CT scan, I’m sure I got it all done. We went through all the options, and I had a meeting with one of the hand doctors in Cincinnati who looked at the MRI and stuff, and he gave it all clear. So, I should be back next week.”

Lewin Diaz was the corresponding roster move for Cooper, the third time Diaz has been called up this season. Diaz started at first base on Tuesday against the Reds.

After surrendering Jonathan India’s first career grand slam Monday, right-handed reliever Zach Pop was taken out due to a blister. The issue is not expected to land the pitcher on the injured list.