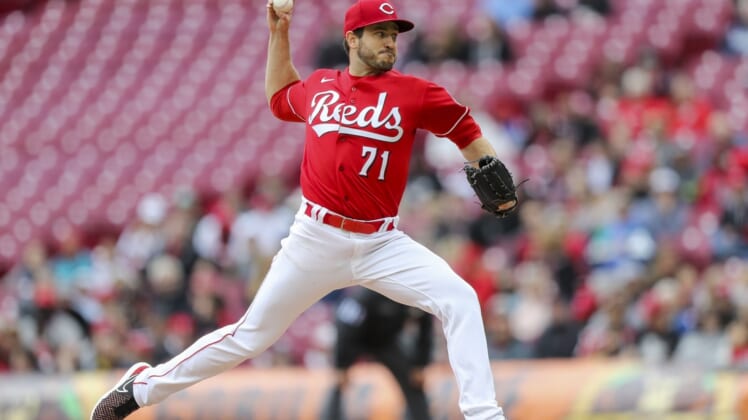 Tyler Stephenson broke an eighth-inning tie with a two-run double and drove in four to help the Cincinnati Reds snap a nine-game losing streak with a 9-2 win over the visiting Pittsburgh Pirates Saturday in the first game of a day-night doubleheader.

Stephenson finished 3-for-4 with two doubles while Lucas Sims (1-0) pitched out of his own bases-loaded, none-out jam in the eighth to record just the second win in 23 games for the Reds.

Tyler Naquin’s three-run double highlighted the seven-run uprising in the eighth for Cincinnati’s biggest inning of the season. The nine runs marked a season high for the Reds, while the Pirates lost for the seventh time in nine games.

The Reds jumped out to a 2-0 lead in the bottom of the first against Pirates starter JT Brubaker, who received the no-decision. He struck out nine, walked two and allowed two runs on three hits in his five innings.

The Pirates began their comeback against Connor Overton in the third on Ben Gamel’s two-out RBI double and then tied it in the sixth when Ke’Bryan Hayes singled home Gamel.

As was the case in Colorado in his last start, Overton was effective in his first five innings before tiring in the sixth. Overton allowed two runs on six hits in his 5 1/3 innings, striking out four and walking none.

The game took a peculiar turn in the bottom of the sixth when backup catcher Andrew Knapp was ejected from the game by home plate umpire Will Little for arguing balls and strikes from the dugout.

That ejection became problematic to the Pirates when starting catcher Roberto Perez injured his left hamstring rounding second base on Gamel’s single in the eighth inning. Perez had to be helped off the field and into the clubhouse for evaluation.

Second baseman Josh VanMeter was forced into emergency duty behind the plate, catching for the first time in his MLB career.

The Pirates loaded the bases in the eighth with none out against Sims. The Reds right-handed reliever recovered by striking out the heart of the order — Hayes, Daniel Vogelbach and Michael Chavis — in succession to escape the jam.

In the bottom of the eighth, the Reds also loaded the bases with none out against reliever Wil Crowe (1-2). But the Reds made the most of their chance when Stephenson drove a ball down the right field line that Gamel appeared to misplay into a two-run go-ahead double.