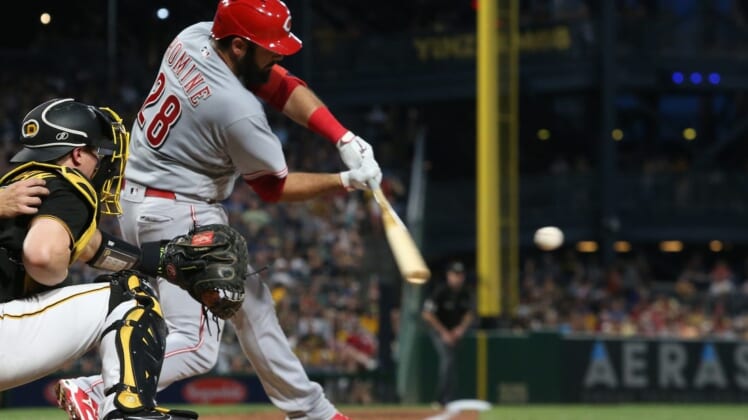 Every starter had at least one hit for the Reds, who won for the third time in 11 games to move ahead of the Pirates into fourth place in the NL Central. Justin Dunn, who won in the majors for the first time since April 15, 2021, combined with four relievers on a four-hitter.

Rodolfo Castro homered in the fourth for the Pirates, who had their two-game winning streak snapped and have lost 11 of 15.

Fraley helped build an unearned run in the third. He drew a one-out walk, went to second on a groundout by Jonathan India and scored after shortstop Oneil Cruz threw the ball away on Kyle Farmer’s grounder.

Donovan Solano hit a leadoff single to open the fourth and went to second on a one-out single by TJ Friedl. Jose Barrero popped out before Austin Romine laced a two-run double.

The Reds piled on in the ninth. They sent 10 batters to the plate and scored five runs via seven straight singles, including RBI hits by Mike Moustakas, Solano, Nick Senzel and Aristides Aquino, and a two-run hit by Barrero.

Solano had three hits while Moustakas and Farmer had two hits apiece.

Dunn (1-1) allowed one run on three hits and four walks while striking out four over five innings. The right-hander, who was acquired from the Seattle Mariners on March 14, went 0-4 with a 4.09 ERA in nine starts between wins.

Castro had two hits for the Pirates.

Beede gave up five runs (four earned) on six hits and one walk while striking out two over four innings.