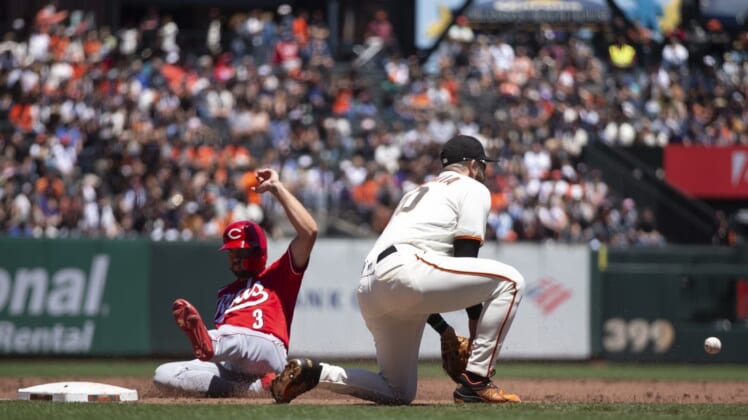 Brandon Drury tripled to spark a seven-run third inning and right-hander Tyler Mahle beat the San Francisco Giants for the first time in his career as the Cincinnati Reds capped a series win on the road with a 10-3 triumph Sunday afternoon.

Nick Senzel went 3-for-3 for the Reds, who have won each of their last two road series 2-1 sandwiching an 0-6 homestand against the Milwaukee Brewers and Los Angeles Dodgers. The Reds had taken two of three at Arizona at the end of their last trip.

Senzel, who had opened the third inning with an infield single, was standing at second base with two outs in a scoreless game before the sky fell on Giants starter Anthony DeSclafani (0-2).

Drury’s triple began a stretch of seven hits in eight batters, with the only non-hit being a walk drawn by Donovan Solano.

Albert Almora Jr. had a two-run single in the uprising, Joey Votto and Matt Reynolds had RBI doubles, and Tommy Pham and Aramis Garcia hit run-scoring singles in the Reds’ second-biggest, single-inning outburst of the season. They put up eight runs in the third of a 20-5 shellacking of the Chicago Cubs last month.

The inning ended when Garcia, a catcher with no career stolen bases, was caught attempting to steal second.

DeSclafani was pulled after Almora’s single made it 6-0. Making just his second start since returning from a two-month absence due to an ankle injury, he was charged with seven runs on seven hits in 2 2/3 innings. He walked one and struck out one.

Staked to a seven-run lead, Mahle (3-6) coasted through 6 2/3 innings, allowing three runs and four hits. He walked one and struck out seven in ending a seven-game winless drought.

Mahle had faced the Giants five previous times in his career, going 0-3. He didn’t get a decision in a 6-4 home loss to San Francisco last month.

The Reds pushed their advantage to 10-1 in the fifth on a two-run throwing error by first baseman Brandon Belt and Garcia’s second RBI single of the game, scoring Senzel, whose second infield single of the day had prompted Belt’s miscue.

Senzel, who added a second single in the 11-batter third inning, scored twice for the Reds, as did Solano and Reynolds. Votto, who doubled twice, finished with two hits, as did Drury, Solano and Garcia.

Mike Yastrzemski had the game’s only home run for the Giants in the fourth inning, a solo shot that was his eighth of the season.

The Giants added two in the seventh on a throwing error by left fielder Pham following a Darin Ruf single and an RBI infield single by Thairo Estrada.