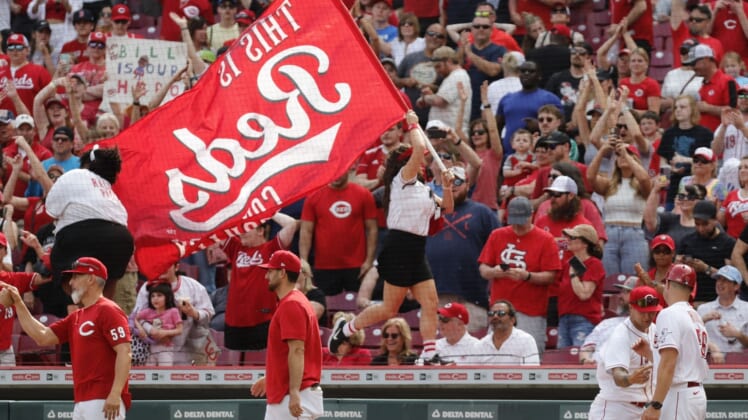 The Cincinnati Reds will look to build a winning streak for the first time in 2022 while the visiting San Diego Padres will aim to start their eight-game road trip on a winning note when the clubs meet Tuesday.

On Sunday, the Reds ended their 11-game skid with a 4-1 win over the St. Louis Cardinals. It was Cincinnati’s first home victory in five tries, snapping their longest home losing streak to open a season since 1955. The Reds, who have the three-game series with San Diego left on their six-game homestand, have yet to post consecutive wins.

“A lot of celebration going on (Sunday),” Reds manager David Bell said. “It was obviously a big win. Our guys have been doing everything they can to win a game, fighting through it and battling.”

The Reds have been doing plenty of battling in their 3-13 start, most notably the injury bug that has landed 11 players on the injured list, including starters Jonathan India and Tyler Stephenson.

Stephenson, the Reds regular catcher, was placed under concussion protocol after Luke Voit collided with him at home plate and tried to knock the ball loose. Instead, Voit slammed Stephenson’s head into the ground in San Diego’s win last Tuesday.

“We’re being very cautious, as you can imagine,” Bell said. “Getting better each day, trending in the right direction, but not going to be ready to play. He might not even go on the (next) road trip (but) that’s not a sign he’s going to be out long term or anything.”

On the bright side, India could return for the opener Tuesday against the Padres after missing time with a right hamstring strain. He’s been testing it in baserunning drills and has reported no setbacks.

“It’s not an excuse, it’s just a fact,” Bell said of the injuries. “When you’re losing, it’s always a combination of factors. We’re missing key guys who are significant parts of this team. That affects everyone. Our focus is getting those guys back as soon as we can, and winning games until that happens.”

Last week, the Padres swept the Reds as part of Cincinnati’s winless seven-game road swing through Los Angeles and San Diego. Now, it’s the Padres’ turn on the road, beginning with three in Cincinnati, three in Pittsburgh and two in Cleveland.

Joe Musgrove (2-0, 1.89 ERA) will head to the hill for San Diego in the opener in hopes of repeating his last outing against Cincinnati at Petco Park. The right-hander struck out seven and walked one, allowing just two runs on four hits in 6 1/3 innings. He earned the win in San Diego’s 6-2 victory last Tuesday.

The Reds will counter with lefty Reiver Sanmartin (0-2, 7.11). Sanmartin was the opposing pitcher to Musgrove last week and could not hold a rare early lead for the Reds. He surrendered five runs on eight hits, striking out four and walking one, taking the loss. After going 2-0 in his rookie season call up last September, he has lost both starts in 2022.

The Padres didn’t commit an error in their first 16 games, an MLB record to start a season. On Sunday, during a 10-2 home loss to the Dodgers, they committed two, leading to a pair of unearned runs.

“We haven’t played a sloppy game like that across the board this year,” manager Bob Melvin said. “It doesn’t feel good. But you move on.”