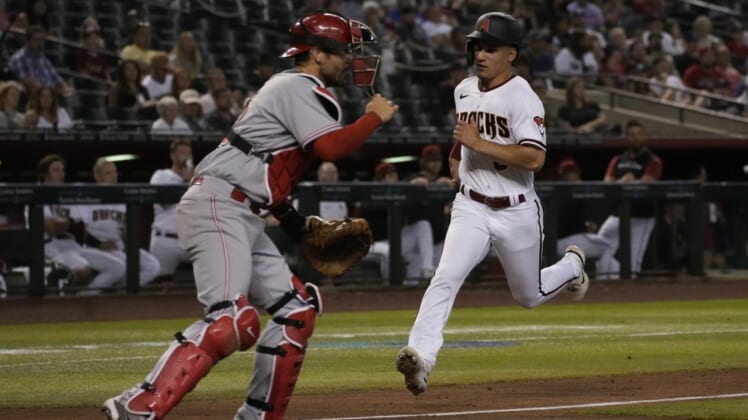 Brandon Drury hit a three-run homer and Mike Moustakas drove in what proved to be the winning run with a broken-bat single as the Cincinnati Reds rallied from a three-run deficit to edge the Arizona Diamondbacks 5-4 on Monday in Phoenix.

Matt Reynolds finished with two hits, an RBI and a run and Nick Senzel singled, walked twice and also scored a run for the Reds, who won for just the 10th time in 32 road contests.

Mike Minor (1-2), making just his third start of the season after missing the first two months due to a shoulder injury, picked up the win allowing four runs on eight hits over 6 1/3 innings. He walked two and struck out five. Hunter Strickland pitched a 1-2-3 ninth to pick up his second save.

Christian Walker homered and Ketel Marte went 2-for-5 with a double and a run for Arizona. Alek Thomas added a pair of infield hits and a run.

Merrill Kelly (5-4) took the loss after allowing five runs on eight hits over six innings. He walked two and struck out seven, including five in a row during one stretch.

Walker gave the Diamondbacks a 2-0 lead in the third inning with his 16th homer of the season, a towering 446-foot drive just inside the foul pole that land deep into the second deck.

The Reds cut it to 2-1 in the fourth when Kyle Farmer lined a two-out double that one-hopped the wall in left, then came around to score on a single by Reynolds.

Arizona extended its lead to 4-1 in the bottom of the fourth on an RBI single by Geraldo Perdomo, driving in Carson Kelly, who had singled and advanced to second on a hit by Thomas. Jordan Luplow drove in Thomas with a sacrifice fly.

Drury tied it in the fifth with his 12th homer of the season into the left field bleachers, driving in Chris Okey, who singled for his first major league hit, and Senzel, who had walked.

The Reds then took a 5-4 lead in sixth when Reynolds singled with one out, stole second and scored when Moustakas, in the midst of a 5-for-52 slump, dropped a single down the right field line.