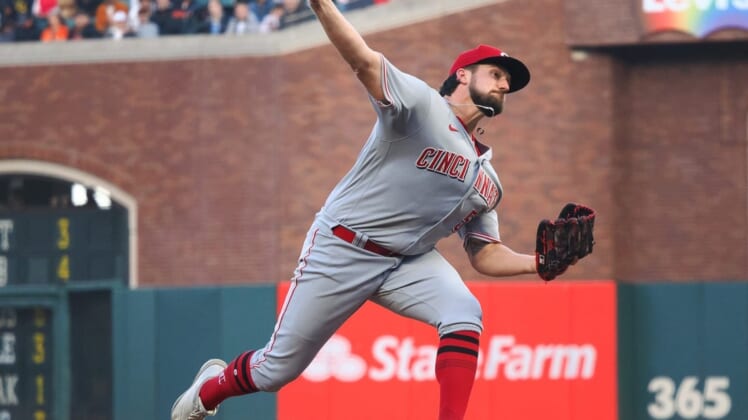 Rookie Graham Ashcraft limited the San Francisco Giants to two runs in a season-high eight innings, leading the visiting Cincinnati Reds to a 4-2 victory on Friday that ended a seven-game losing streak.

Cincinnati designated hitter Mike Moustakas doubled twice and scored twice in the opener of a three-game series. Nick Senzel singled, doubled and drove in two runs for the Reds, who had lost all six games on their just-completed homestand.

Ashcraft (4-1) allowed a solo shot to Evan Longoria, his sixth home run, in the fourth inning and an RBI single to Mike Yastrzemski in the eighth. He yielded six hits, struck out eight, hit a batter with a pitch and did not issue a walk.

Hunter Strickland worked around a two-out walk to Longoria in the ninth for his third save, sending the Giants to the fifth loss in their last six games.

Strickland, a former Giant, struck out Brandon Crawford as the potential tying run to end the contest.

Ashcraft, who made his seventh major league start, had never previously pitched more than seven innings. He also beat the Giants with 6 1/3 shutout innings in a 5-1 home win on May 27.

The Reds elected to send the 24-year-old out for an eighth inning, protecting a 4-1 lead. Yastrzemski’s two-out single scored Wilmer Flores, bringing the potential tying run to the plate.

Ashcraft needed just one pitch — his 104th and last of the night — to induce Darin Ruf into an inning-ending fly to center field.

Moustakas and Senzel teamed twice for runs for the Reds. They each hit an RBI double in the second inning. In the sixth, Cincinnati extended the lead to 4-1 on Senzel’s second run-scoring hit after Moustakas’ second double.

The Reds’ other run scored on a throwing error by Giants shortstop Crawford in the fifth.

Longoria and Curt Casali had two hits apiece for the Giants, who were out-hit 7-6.