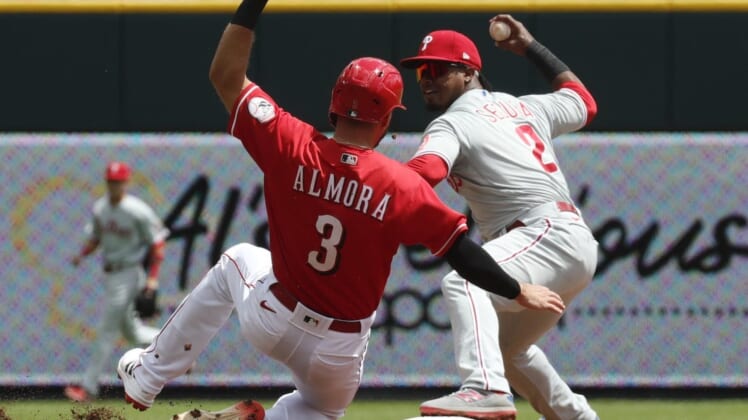 Jose Barrero hit a walk-off single to center field with two outs in the bottom of the ninth inning to score Albert Almora Jr. as the host Cincinnati Reds defeated the Philadelphia Phillies 1-0 on Wednesday.

Alejo Lopez had three of the six hits for the Reds, who snapped a two-game losing streak.

Dominguez walked Almora with one out in the bottom of the ninth. Aristides Aquino struck out and Lopez followed with a single to left. Barrero then hit the game-winning RBI single to center.

The Phillies managed only five hits.

Nick Castellanos singled to right to open the fourth for the Phillies. One out later, Darick Hall blooped a single to center. Matt Vierling flied out to shallow center and Nick Maton grounded out to end the threat.

The Reds managed only two hits, both singles, through the first four innings — one apiece by Jonathan India and Lopez.

Alec Bohm lined a shot to the warning track with one out in the fifth. But Aquino lunged to make a stellar catch and then turned and doubled Rhys Hoskins off first base.

Lopez hit a leadoff double in the fifth but was eventually stranded and the game remained scoreless.

Diaz retired the Phillies in order in the eighth on just seven pitches.

TJ Friedl opened the eighth with a single off reliever David Robertson. India popped out to shortstop, Jake Fraley struck out and Kyle Farmer flied out to deep right.