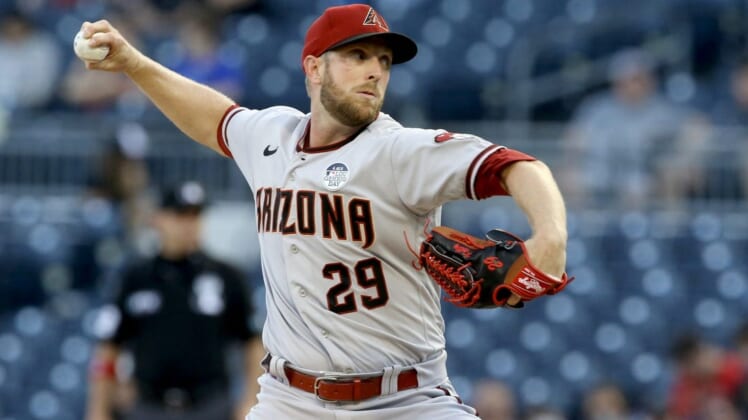 Right-hander Merrill Kelly will try for his second win over Cincinnati in six days when the host Arizona Diamondbacks open a six-game homestand with a three-game series against the Reds on Monday night in Phoenix.

Kelly (5-3, 3.32 ERA) allowed the Reds just one hit in six innings in a 7-0 victory over the Reds on Wednesday night in Cincinnati, although he picked up a very big assist from his defense.

Center fielder Alek Thomas reached over the fence to rob Joey Votto of a two-run homer in the first inning.

“I thought it was gone,” Kelly said afterward. “If he doesn’t catch that ball, that game could turn out a lot differently than it did.”

Instead, the Diamondbacks went on to pick up one of their four wins on a season-long 10-game road trip that began in Pittsburgh and ended on a high note in Philadelphia. Arizona snapped the Phillies’ nine-game winning streak on Sunday afternoon with a convincing 13-1 victory.

Christian Walker went 3-for-5 with a triple, double and three RBIs, and Josh Rojas had two hits and scored three times to lead Arizona. The Diamondbacks were shut out three times on the trip, once in each series.

“Long road trip,” Walker said. “It feels like this road trip was a month long. It’s nice to end this on a positive note and get some momentum on our side. Head back west and keep doing what we’re doing.”

The Diamondbacks now begin a stretch that will see them play 11 of their next 14 games at Chase Field, with the only road trip a short one to San Diego.

Arizona and the Reds split their four games last week in Cincinnati.

Veteran left-hander Mike Minor (0-2, 8.64 ERA), who took the loss in Wednesday’s game against the Diamondbacks, will make his third start of the season. He allowed three runs on three hits, including a two-run homer to Walker and a solo blast by Rojas, over 4 1/3 innings. Minor walked three and struck out four.

Cincinnati snapped a four-game losing streak with a 7-6 win at St. Louis on Sunday.

The Reds rallied from an early 3-0 deficit, with Tommy Pham’s solo homer in the eighth inning proving to be the game-winner. The win helped the team move on from a bitter 5-4 loss on Saturday when the Cardinals won it on a two-run, walk-off homer by Tommy Edman with two outs in the bottom of the ninth.

Cincinnati improved to just 9-22 in road games, the worst mark in the National League.

“This was a big win,” added right fielder TJ Friedl, who had a single, triple and two RBIs. “Especially bouncing back after a game like yesterday. That’s a good ballclub and a good team all around. Getting that win today feels real good.”