Reds break out bats to clinch series win over Pirates 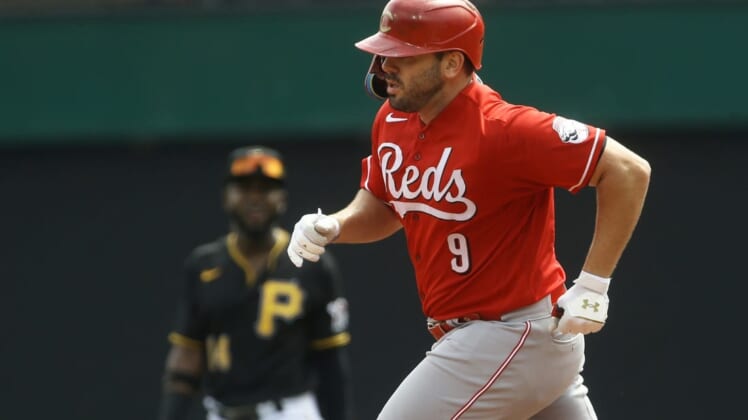 The Cincinnati Reds scored four runs in the sixth inning to take a 9-5 win over the Pittsburgh Pirates on Sunday afternoon.

The win clinched the weekend series for Cincinnati, which also won on Saturday night at PNC Park.

Entering the sixth inning, the Reds led 3-2. Jake Fraley picked up a two-run single to right field to bring in TJ Friedl and Aristides Aquino. Then Jonathan India tripled to score Fraley. Donovan Solano kept it going, driving in India with a single to shallow left field.

Solano went 3-for-5 on the day, driving in two runs. Fraley crossed the plate four times and had three RBIs.

Fraley got the Reds off to a good start early, pummeling a leadoff home run to right field. He is now 14-for-41 (.341) over the last 12 games with five home runs, two doubles and 11 RBIs.

Pittsburgh quickly answered, scoring two runs in the bottom of the first to take a 2-1 lead on Ben Gamel’s RBI single and Rodolfo Castro’s double.

Trailing 7-2 going into the bottom of the sixth, the Pirates fired back again, scoring three runs to cut the deficit to just one run. Tucupita Marcano hit a double to deep right to score two runs with the help of a fielding error by Aquino. Jason Delay added an RBI single in the next at-bat.

Cincinnati put the game on ice with a strong eighth inning. Solano singled to right field to score Fraley. Then, Nick Senzel drove in India with a base hit to center field.

Coming into Sunday, Pittsburgh was 36-18 in games that they have at least eight hits. Ten hits weren’t enough to pick up a win in the finale of the weekend series.

The Reds are now 7-5 against the Pirates this season.