Reds attempt to build on newcomers’ debuts vs. Rockies 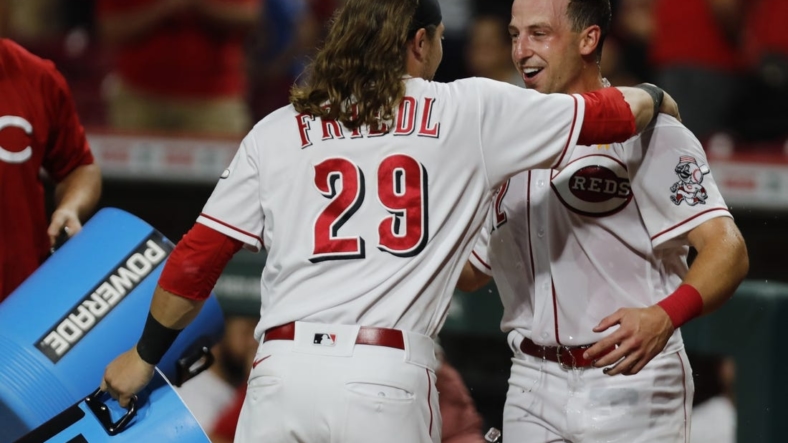 The Cincinnati Reds will try to continue making the most of their ever-expanding roster when they host the Colorado Rockies on Saturday night in the second game of a three-game series.

Infielder Spencer Steer, 24, and 32-year-old reliever Fernando Cruz both contributed in their major league debuts as the Reds won the opener 3-2 on Friday night. They became the 61st and 62nd players to play for Cincinnati this season, extending the franchise record.

Steer homered in the fifth inning to get the Reds on the board, walked twice and doubled to open the ninth to start the game-winning rally against the Rockies. Cruz struck out two while throwing a perfect sixth inning.

Steer, a third-round pick in 2019, was acquired on Aug. 2 in the trade that sent starting pitcher Tyler Mahle to the Minnesota Twins. He was immediately ranked as one of Cincinnati’s top 10 prospects.

Reds manager David Bell said Steer could play different positions over the course of the weekend as the season winds to a close.

“I wouldn’t say one spot or the other that I’m more comfortable at because of how much I’ve been bouncing around,” Steer said.

The Reds will send lefty Nick Lodolo (3-5, 4.30 ERA) to the mound in the middle game of the series. Lodolo will make his 14th career start, all this season, and his first career appearance against the Rockies.

Lodolo has made 10 of his 13 previous starts this season since returning from a 69-day stint on the injured list, going 2-3 with a 3.96 ERA in that span.

The Rockies will counter with right-hander German Marquez (7-10, 4.97 ERA). His last time out, Marquez tossed seven scoreless innings at New York in a 1-0 Rockies win over the Mets, allowing one hit with two walks and five strikeouts.

The southpaw has allowed three or fewer runs in seven of his past nine outings, posting a 3-3 record with a 3.49 ERA in those nine starts.

In his last outing against the Reds, a start in Cincinnati on June 12, 2021, Marquez was tagged for nine runs — eight earned — in five-plus innings while matching a career high by allowing 12 hits. He is 3-1 in four career starts against Cincinnati, posting a 5.40 ERA with seven walks and 26 strikeouts.

Colorado outfielder Yonathan Daza (left shoulder dislocation) went 3-for-4 and scored two runs in his first game of his rehab assignment with Albuquerque on Thursday.

“He got back to us (Friday) morning and said Daza looked like Daza,” Rockies manager Bud Black said of his communication with Albuquerque manager Warren Schaeffer. “That’s a good thing when a player looks normal in the eyes of a manager who’s seen him over the years. Each day, we’ll evaluate where he is. It sounds as though he’s in a good spot. He’s confident. He’s competing.”