The 22-year-old waved to cheering fans after he coolly sank a long birdie putt on the par-three 16th to take the lead at 10-under... 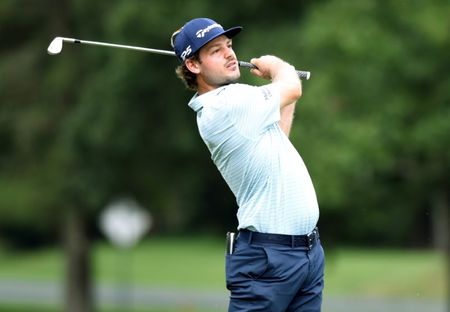 (Reuters) – Doc Redman tamed strong winds to card a four-under par 67 in the Bermuda Championship third round on Saturday to take a one stroke lead as he guns for his first PGA Tour win.

The 22-year-old waved to cheering fans after he coolly sank a long birdie putt on the par-three 16th to take the lead at 10-under. The tournament is the first PGA Tour event to allow fans since the onset of the COVID-19 pandemic.

“It’s very exciting to be here. I’ve had a lot of good results recently and it’s just exciting to have a chance,” Redman said.

Fellow Americans Ryan Armour, Wyndham Clark and Kramer Hickok all lurked one stroke off the lead at nine-under with Brian Gay, Ollie Schniederjans and Australia’s Matt Jones tied for fifth at eight-under.

The strong winds that hit the seaside Port Royal Golf Course on Friday were somewhat weaker on Saturday but still managed to play havoc at times, including a strong gust on the par-four ninth that contributed to Redman’s lone bogey of the day.

Redman, who had five birdies on Saturday, said he did not plan to change his routine heading into Sunday’s final round.

“Just get a good meal, get some rest and tomorrow’s just like any other round, I’m just in a slightly different position,” he said. “But that’s not going to change anything.”