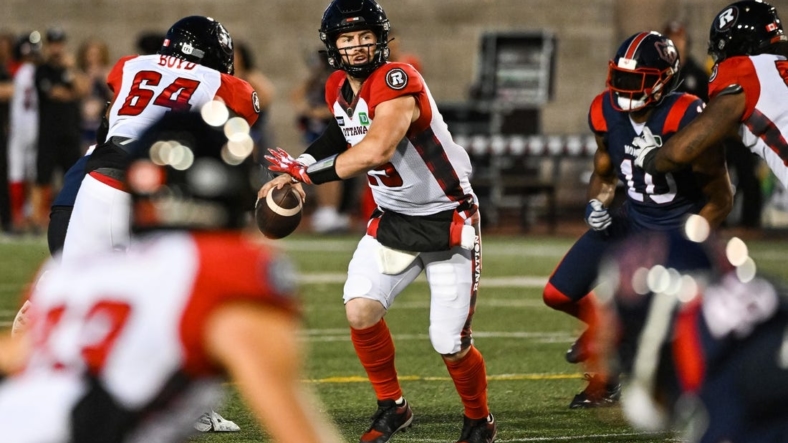 Bolstered by two straight wins, the Ottawa Redblacks continue their pursuit of a playoff spot Saturday afternoon against the visiting Toronto Argonauts.

“We don’t care whether we beat them or lost to them, we get an opportunity to go play a good football team,” Ottawa coach Paul LaPolice said. “What we did before against them doesn’t matter.”

“They’re hitting their stride,” Argonauts coach Ryan Dinwiddie said. “We have to play our best to beat them. They have a great roster and they’re starting to put it together now.”

Redblacks quarterback Nick Arbuckle has started the past two games, passing for a combined 532 yards that includes 313 yards and a touchdown against Montreal.

“He processes well,” LaPolice said. “He’s seeing the pictures and has certainly been able to climb and move in the pocket and find the next throw and keep us on the field when the protection breaks down.”

Jamal Peters, who has five interceptions over the past two games, will look to slow Acklin down.

“We have to know where (Acklin) is at,” Dinwiddie said. “He’ll have his stats, but we can’t let him do what he did last time.”

Arbuckle was expected to be Toronto’s starting quarterback last season, but a hamstring injury hampered him. The Argonauts wound up trading him to the Edmonton Elks, who subsequently traded him to Ottawa on July 11.

“Nick is very intelligent,” Dinwiddie said. “He understands things and he works very hard. The kid invests a lot of time in watching film. He’s savvy. At the same time, we have to make sure he’s uncomfortable. We have to get after him and maybe get a fumble because that was kind of the issue here. You look at the way he played last week and he was lights out.”