Redblacks get another crack at Blue Bombers 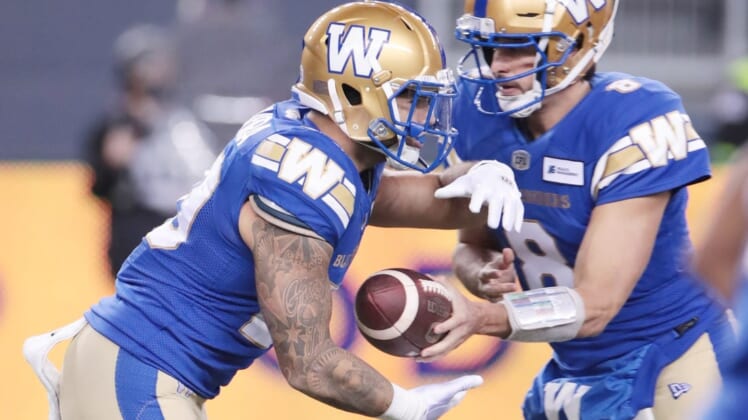 The Ottawa Redblacks hope that home field makes the difference in a rematch with the Winnipeg Blue Bombers on Friday night.

The Blue Bombers won 19-17 at home over the Redblacks in the June 10 season opener for both teams on a late field goal that completed a drive engineered by backup quarterback Dru Brown.

With 1:33 to play in regulation and the Blue Bombers trailing 17-16, starting quarterback Zach Collaros was removed for concussion protocol after taking a hit while running for a first down.

Brown was 3-for-3 in passing during a six-play, 55-yard drive completed by Marc Liegghio’s 25-yard field goal.

“I just saw (Collaros) on the ground, and instantly you feel terrible in a situation like that,” Brown said. “But I just tried to get past that and let loose.”

“I’ve been impressed with Dru since he got here,” said Collaros, who showed no ill effects at practice this week from what was listed as a neck injury.

The Redblacks feel that they did enough to win on Friday.

“I liked our compete level,” Redblacks coach Paul LaPolice said. “We were never intimidated. Yeah, they were 19-1 at home (in their past 20 games), yeah, they were the Grey Cup champs. We didn’t care about any of those other factors. We cared about us.”

The Redblacks stifled the Blue Bombers’ running game on Friday, limiting Brady Oliveira to 17 yards on 10 rushes and Johnny Augustine to 10 yards on three carries.

“We just didn’t play physical enough,” Blue Bombers guard Patrick Neufeld said. “Kudos to them as well, they had a really good plan. They did some really good things that kept us at bay and we just didn’t get the momentum kind of going. But I think ultimately, we’re going to hold ourselves accountable.”

Redblacks running backs William Powell (Achilles) and Brendan Gillanders (hip) are listed as out for the game on Friday.

Blue Bombers linebacker Jesse Briggs (foot) was listed as out.