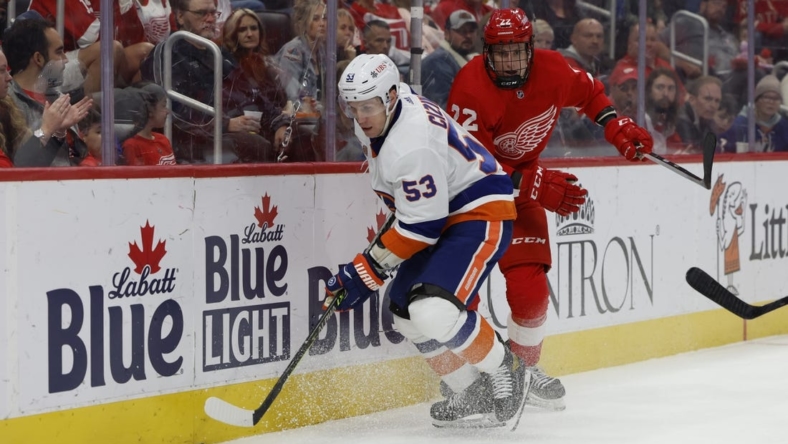 Ville Husso made 24 saves to record his second shutout of the season and help lead the Detroit Red Wings to a 3-0 home win over the New York Islanders on Saturday.

Dominik Kubalik had a goal and an assist for Detroit, which has won two straight and three of its last four.

After a scoreless first period, Detroit opened the scoring on a two-man advantage with 13:31 remaining in the second period when Lucas Raymond pounced on a loose puck at the side of the Islanders goal and banged it into an open net to make it 1-0 Red Wings.

Detroit then scored short-handed with 7:09 remaining in the second when Pius Suter skated in all alone on Islanders goalie Semyon Varlamov and beat him to the glove side to give the Red Wings a 2-0 lead.

It was the first short-handed goal of the season allowed by the Islanders.

Detroit then went ahead 3-0 with 9:47 remaining in the game on a goal by Kubalik, who skated in and fired a shot from the left face-off circle that got past Varlamov to the blocker side.

The Islanders pulled Varlamov with more than five minutes left but had to quickly put him back in following a minor penalty to Anders Lee.

After killing off the penalty, New York pulled Varlamov again with under three minutes remaining, but couldn’t put one past Husso in being shutout for the first time this year.

Varlamov finished with 22 saves in defeat for the Islanders.

Detroit also blocked 24 shots to 10 for the Islanders.