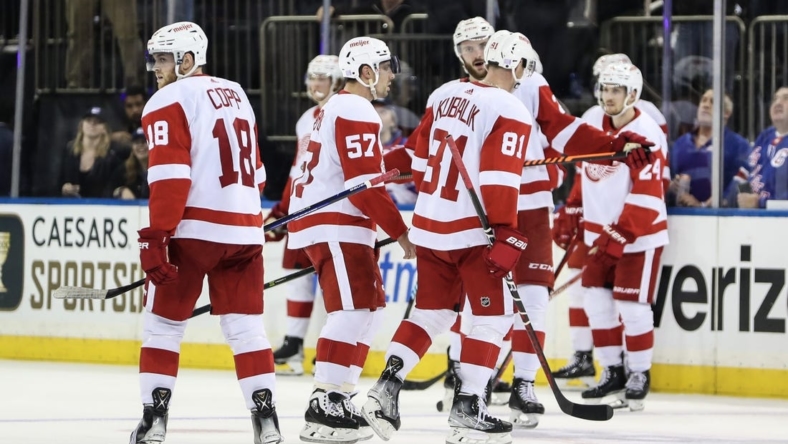 The Detroit Red Wings are showing signs of becoming a playoff contender and will look for their fourth straight victory when they host the Montreal Canadiens for the second time this season on Tuesday.

Detroit gave up eight goals at Buffalo on Halloween night but have allowed just three during the ensuing winning streak. The Red Wings defeated Washington 3-1, then blanked the New York Islanders 3-0.

Playing the tail end of a back-to-back on Sunday, Detroit trailed the New York Rangers 2-0 after the first period. Matt Luff and Pius Suter scored second-period goals to tie it and Dominik Kubalik’s power-play goal in overtime gave the Wings a 3-2 win.

“We had some looks and it could have easily been 2-1 or 2-2 (in the first period),” Kubalik said. “We came back to the room and said we need to keep playing and working and hopefully we’ll get one and it’s going to turn around, and that’s exactly what happened. We deserved it, we earned it and we’re happy we got the win.”

Luff scored for the first time since being recalled from Detroit’s AHL affiliate in Grand Rapids. Injuries have sidelined four of the Red Wings’ forwards and another is in the player assistance program, but they’re still plugging along.

“With the type of offense we have out of the lineup right now, guys are committed to playing the right way and it’s hard to do consistently,” coach Derek Lalonde said.

Alex Nedeljkovic bounced back from his poor outing against the Sabres by making 27 saves against the Rangers.

“I just wanted to focus on me (Sunday), stop the puck for the boys and give them a chance to win in front of me,” Nedeljkovic said.

Ville Husso has emerged as the No. 1 goalie. His shutout against the Islanders was his second of the season. He’s 5-1-1 with a .941 save percentage.

Montreal will look to snap a three-game losing streak in its return visit. In their last outing, the Canadiens lost at home to Vegas on Saturday 6-4.

Most of the scoring was done in the third period, as the Canadiens trailed 2-1 after two.

“I think we played a really good first period,” Canadiens coach Martin St. Louis said. “In the second we had good intentions, we had options but we weren’t able to execute our plays, they had a lot of offense on the other end and it didn’t allow our defensemen to change.”

The Golden Knights took the lead on a power-play goal at 4:45 of the third and never relinquished it.

“We had a good push at the end of the second to start the third, but we weren’t able to kill the penalty that gave them the advantage,” St. Louis said. “I liked our fight, but we shot ourselves in the foot a few times.”

Forward Josh Anderson won’t make the trip to Detroit. He was suspended for two games without pay for boarding Vegas defenseman Alex Pietrangelo during the third period.