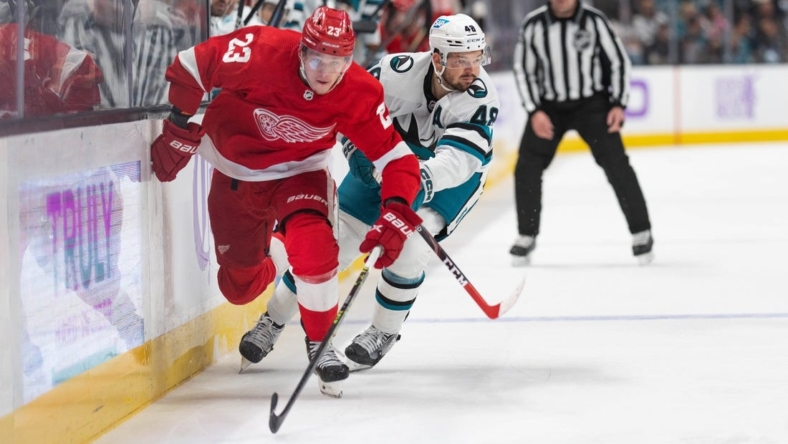 David Perron had a goal and two assists to help the visiting Detroit Red Wings end a four-game losing streak with a 7-4 win against the San Jose Sharks on Thursday night.

Dominik Kubalik and Pius Suter each had a goal and an assist, and Ville Husso made 21 saves for the Red Wings, who scored more than three goals for the first time in 12 games.

Erik Karlsson had a goal and three assists, Kevin Labanc had a goal and assist, and James Reimer made 14 saves for the Sharks, who came in riding a season-high three-game winning streak.

Moritz Seider scored his first goal of the season on a wrist shot from the right faceoff circle to give the Red Wings a 5-4 lead with 6:06 left in the third period.

Later, Reimer came far out of his net to try and stop Suter on a breakaway, but he went around him for the tap-in goal and a 6-4 lead at 16:23.

The Sharks scored goals 2:33 apart earlier in the third to tie the score 4-4.

Logan Couture was hit by a slap shot by Karlsson and then shot the puck in the net to make it 4-3 at 8:58.

The Sharks took a 1-0 lead at 6:56 of the first period when Karlsson made a no-look backhand pass to a trailing Labanc for a one-timer.

Detroit tied it 1-1 at 9:39 when Filip Hronek scored off Perron’s long centering pass from the wall.

The Sharks moved back ahead 2-1 at 12:52 when Matt Nieto was surrounded by four Detroit players but managed a one-handed shot that got past Husso.

Perron tied it 2-2 at 11:27 of the second when a slap shot by Dylan Larkin glanced off him and into the San Jose net.

Jake Walman gave Detroit a 3-2 lead at 16:44 of the second with a point shot through traffic.

In the third period, Joe Veleno retrieved the puck behind the San Jose net and scored on a wraparound for a 4-2 lead at the 4:58 mark.