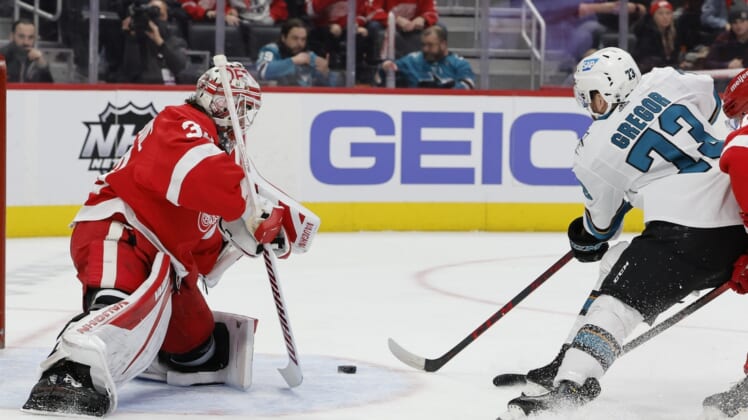 Tyler Bertuzzi and Pius Suter each scored two goals to lead the Detroit Red Wings to a 6-2 home win over the San Jose Sharks on Tuesday.

The Red Wings opened the scoring with 6:58 left in the first period on a goal by Bertuzzi, who from a bad angle behind the end line and to the left of the San Jose goal swept a backhand that went off of the stick of San Jose goalie James Reimer and into the net.

In the second period, the Red Wings took a 3-0 lead with two short-handed goals in a span of 37 seconds.

First, Suter stripped the puck from San Jose defenseman Brent Burns, skated in all alone on Reimer, and fired a shot just underneath the crossbar with 17:56 left in the second period.

Bertuzzi then took a pass from Carter Rowney on a 2-on-1 and beat Reimer to the blocker side with 17:19 remaining in the second.

San Jose answered 1:22 later, cutting Detroit’s lead to 3-1 with 15:57 left in the second on a goal by Jasper Weatherby, who tipped a shot from the boards by Burns into the goal.

But Detroit restored its lead to three goals with 10:28 remaining in the second on another goal by Suter, who took a backhanded pass from Michael Rasmussen and fired a shot into the goal from the face-off circle to the right of Reimer.

Early in the third, San Jose cut Detroit’s lead to 4-2 on a goal by Alexander Barabanov with 18:20 left in the game.

But Detroit took a 5-2 lead with 16:09 left when Dylan Larkin fired a shot from the left face-off circle underneath the crossbar and into the goal.

The Red Wings then grabbed a 6-2 lead with 14:59 remaining on an unassisted goal by Robby Fabbri.