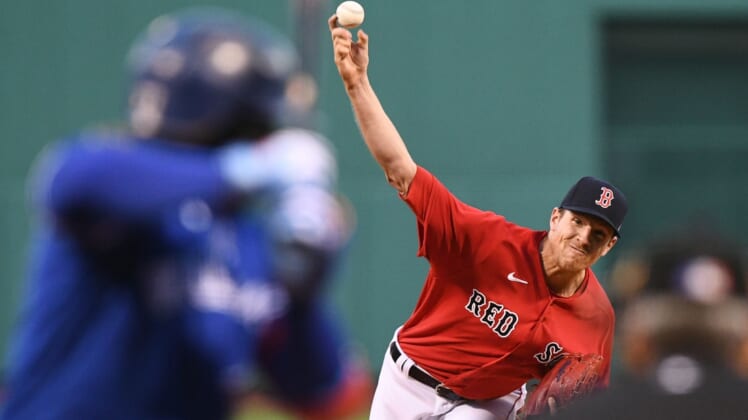 Boston Red Sox right-hander Nick Pivetta will try to reverse his early-season struggles Tuesday night, but he faces a tough task in a return matchup against the host Toronto Blue Jays.

Pivetta, a native of Victoria, British Columbia, was the losing pitcher in the Blue Jays’ 6-1 victory at Boston on Wednesday. His mound opponent Tuesday will be right-hander Kevin Gausman, who allowed one run in eight-plus innings Thursday in Toronto’s 3-2 win in the rubber match of a three-game series at Boston.

Boston will need a good performance from Pivetta (0-3, 10.03 ERA) after losing the opener of the four-game series 6-2 Monday night due to Bo Bichette’s eighth-inning grand slam.

All five runs Pivetta allowed in his four innings on Wednesday came in the second inning.

“Super disappointing with how the second inning went,” Pivetta said after the start. “I had way higher hopes with how this would go.”

The outing continued a poor opening to the season in which Pivetta hasn’t gone more than 5 2/3 innings in an outing and hasn’t held an opponent to fewer than four runs.

“It’s unfortunate, but I can’t remember the last time I had to deal with something like this,” Pivetta said. “You kind of find out who you are in these moments, how you’re going to proceed.”

Pivetta pitched scoreless innings in the third and fourth on Wednesday. Pitching coach Dave Bush helped him make adjustments that improved the velocity on his fastball and the consistency of his curveball.

“Honestly, the last two innings were his best innings so far out of the three outings,” Red Sox manager Alex Cora said following the Wednesday game. “If we’re going to take something positive out of this, it was the way he finished.”

“He was awesome. That’s an ace for you,” Blue Jays manager Charlie Montoyo said after Gausman’s win in Boston. “Against a good-hitting lineup, that (splitter) was nasty, locating all of his pitches, throwing strikes. We needed a start like that and he gave it to us.”

Gausman (1-1, 2.89 ERA) was looking for his second career complete game but was removed after a leadoff single in the ninth.

“In my mind, that was my game, so I was going out there in the ninth to get the three outs,” Gausman said. “That was my goal. Obviously, it was a good first pitch to (Trevor) Story and he hit it the other way. That could easily have been a ground ball to the shortstop and I’m still in the game.”

Boston put right-handers Kutter Crawford and Tanner Houck on the restricted list, apparently because they are unvaccinated, preventing them from entering Canada.

Red Sox catcher Kevin Plawecki was reinstated from the COVID-related IL, and catcher Connor Wong was optioned to Triple-A Worcester.

Cora, who tested positive for COVID-19 last week, was not with the team on Monday. Bench coach Will Venable remained the acting manager.

“A.C. is doing well,” Venable said. “Better and better every day. Still going through the protocol and still kind of day-to-day. Just not here (Monday), and that’s as far as I know.”