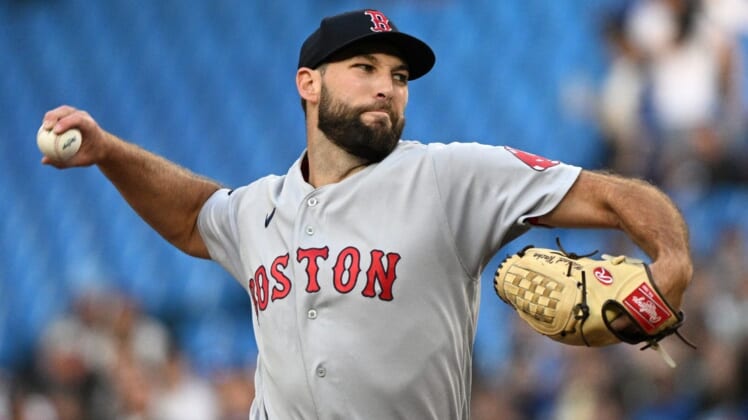 Baseball historians will find plenty of reasons for the collapse of the Boston Red Sox this season.

Wacha will get another chance to show how valuable he is to the Red Sox when he takes the mound at Baltimore on Saturday. The Orioles won the series opener in a shootout Friday night, 15-10.

Wacha (7-1, 2.44 ERA) returned Sunday from his long stint on the injured list caused by right-shoulder inflammation and immediately was in top form. He threw seven shutout innings in a 3-0 win against the New York Yankees, giving up two hits and one walk while striking out nine.

“You look up and you see his numbers, he was really good for us early on,” Boston manager Alex Cora said. “He was one of the reasons we were playing good baseball. To have him back means a lot.”

Two days later, Wacha took the mound against the Toronto Blue Jays and was tagged for three runs in a 6-5 loss.

He was scratched from his next start on July 4 because of shoulder tightness and, shortly afterward, the spiral began for the Red Sox.

They went 3-10 the final two weeks before the All-Star break and 2-7 coming out, leaving them hovering around .500 ever since.

When Wacha pitched on Sunday, the Red Sox were three games under .500. They won that game and two of three the ensuing three against the host Pittsburgh Pirates to begin this week before the pitching experienced another setback in the opener at Baltimore.

Wacha kept his teammates in the game in his Sunday outing by throwing strikes and working fast in the 2-hour, 15-minute contest.

“Yeah, I feel like I work better that way,” Wacha said. “I feel like my successful outings are getting back on the mound and on the attack mode.

“(The Yankees) came out swinging early, and I was making quality pitches, and they turned into quick outs, and I was able to go deeper into the game.”

Bradish made his major league debut against the Red Sox on April 29 and took a 3-1 defeat in Baltimore. The right-hander allowed three runs (two earned) in six innings. He faced the Red Sox again on May 27 and was pounded for six runs on six hits in 1 2/3 innings.

Bradish most recently worked 4 2/3 innings on Monday in the Orioles’ 7-3 win over the Blue Jays, allowing three runs and six hits.

He was one out away from departing with a four-run lead and being eligible for the win, but he was lifted after allowing a two-out single to Bo Bichette in the fifth.

In the start before that, he pitched 5 1/3 innings and left with a 3-1 lead over Toronto, but the bullpen blew the advantage before the Orioles rallied to win 6-5.

The Orioles have won in each of his past four starts, but Bradish did not receive the decision in any of them.

Baltimore recalled outfielder Kyle Stowers from Triple-A Norfolk on Friday, and he went 2-for-5 with a run in his first major league action since June.

Stowers was one of seven Baltimore batters who collected at least two hits in the series opener. Anthony Santander led the way with a homer, a double, a single and four RBIs. Jorge Mateo, Adley Rutschman (three hits), Ryan Mountcastle and Ramon Urias also homered for the Orioles.