Triston Casas has been very good on offense and defense for the Boston Red Sox’s Triple-A affiliate Worcester Woosox in 2022 and he is forcing the team to push up his eventual big league debut timeline.

Casas is viewed as the best prospect in the Red Sox farm system, and top-three among first basemen throughout the league. While he really didn’t get much of a chance to impress talent evaluators with only one at-bat during spring training, he is expected to make his way to the major league level at some point this summer. However, his strong play in the International League East over the first couple of weeks of the season is forcing team brass to think twice about when to bring him up.

The Worcester Woosox has gotten off to an outstanding 7-1 start and currently sits in first place in the division. Casas has helped lead the team to their hot start and produced headline fodder as well. On Tuesday, the 22-year-old crushed a 477-foot home run in the team’s 8-3 win over the Lehigh Valley Iron Pigs. He followed that up Wednesday with a 410-foot shot in another thrashing of Lehigh Valley in a 7-3 victory.

Triston Casas off to strong start with 2022 Worcester Woosox

While Casas’ .231 batting average doesn’t jump out on the stat sheet after 26-at bats, he is still tied for second on the team in home runs (3), runs-batted-in (8), and slugging percentage (.615), and third in on-base percentage and on-base plus slugging.

However, what has added to Triston Casas’ growing value is the outstanding defense he has displayed for the team thus far. Woosox manager — and nine-year big league veteran — Chad Tracy recently called his defense over the team’s first eight games “exceptional.” And Claiming that the Miami native saved the infield from five errors during the team’s red hot start.

Along with his power display on Wednesday, Casas also smoked a two-run single with two outs to help the team lock in a fifth straight victory. 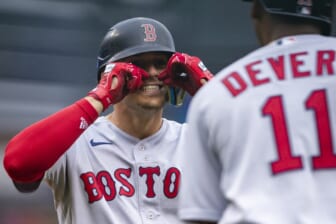