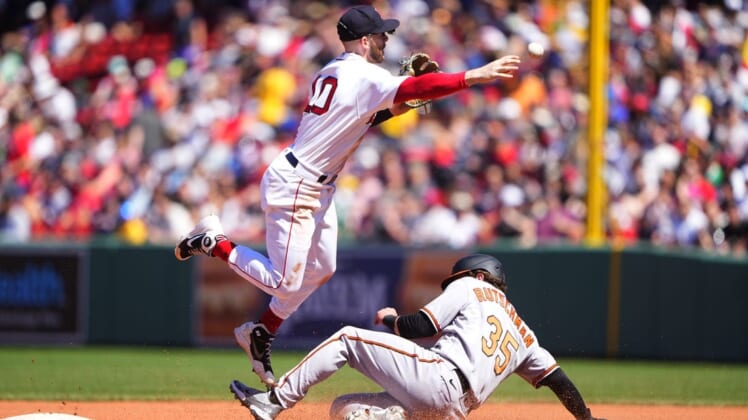 The Boston Red Sox hit a season-high five home runs and banged out 15 total hits on their way to a 12-2 win over the Baltimore Orioles on Sunday afternoon.

Cordero was 2-for-4 with the homer, a double, two runs and three RBIs.

Nick Pivetta (4-4) struck out five and allowed just one run on five hits in six innings to earn the win.

Baltimore’s Trey Mancini went 3-for-3 with an RBI while Jorge Mateo finished 2-for-4 from the No. 9 hole. The duo combined for five of the team’s seven hits.

After Orioles starter Bruce Zimmermann (2-3) erased J.D. Martinez’s two-out single in the first inning, the Sox tagged him for a pair of homers in the second to take a 3-0 lead.

Christian Vazquez lined a one-out double to left before scoring Boston’s first run ahead of Dalbec on a two-run homer high over the Green Monster in left field.

Two batters later with two outs, Cordero hit his second homer in as many Sundays to the deepest part of the park in center.

In the third, Pivetta loaded the bases with two walks after Mateo’s double, but a fly ball ended Baltimore’s threat.

Devers wasted little time in the next half-inning as he extended the lead to 4-0, clearing the right-center field bullpens for a leadoff homer. It was the Sox star third baseman’s eighth long ball of May.

The Sox continued teeing off by hitting two more homers in the fourth inning. Within a span of three batters, Arroyo and Hernandez crushed solo shots high over the Monster in left.

Zimmermann, who allowed six runs on eight hits in four frames in his first career start against Boston, has surrendered nine home runs over his last two starts.

Baltimore got on the board in the fifth with Mancini’s RBI single scoring Cedric Mullins, but Vazquez and the Sox responded with a line RBI double to right.

In Boston’s five-run eighth, Cordero and Bogaerts laced two-run doubles with a Martinez bases-loaded walk sandwich in between.

An attempted double play ball that allowed Chris Owings to reach scored the second Baltimore run in the ninth.