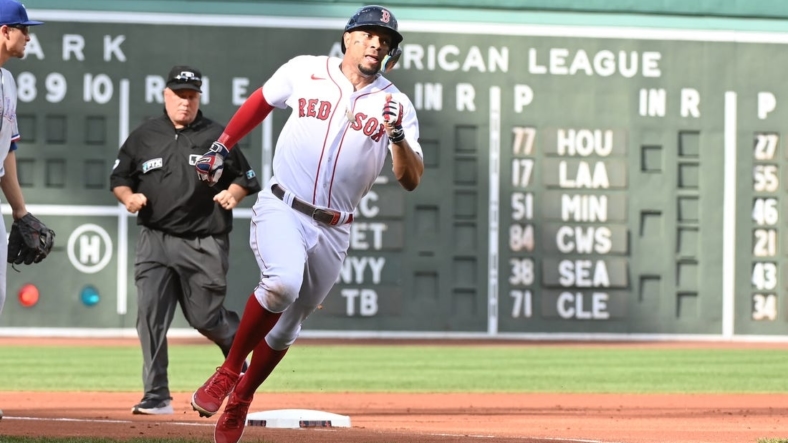 Brayan Bello pitched six shutout innings and Rafael Devers drove in two runs as the Boston Red Sox held on for a 5-3 win over the visiting Texas Rangers on Saturday night.

Devers, Xander Bogaerts and Trevor Story all went 2-for-4. Bogaerts scored twice, while Story hit two doubles to reach 20 on the season.

Devers hit a run-scoring double in the first inning to ignite Boston’s offense, reaching base for a seventh straight plate appearance since breaking a career-long 0-for-24 skid in Thursday’s eighth inning.

The Rangers cut into a 5-0 deficit with three runs in the eighth on home runs by Marcus Semien (two-run) and Nathaniel Lowe (solo). They also loaded the bases against Red Sox reliever Matt Barnes in the ninth, but John Schreiber got the final two outs to lock down his sixth save.

Texas opted to use five relief pitchers after not announcing a starter after Friday’s game. Dennis Santana (3-7) allowed the first Boston run on one hit with two walks while striking out three over the first two innings.

Devers gave the Red Sox a 1-0 lead in the opening frame as his two-out RBI double fell past a diving Calhoun in left in front of the Green Monster to score Bogaerts.

Boston added to its lead in the fifth, turning two walks, a balk and RBI fielder’s choices by Bogaerts and Devers into two unearned runs against Brock Burke.

In the seventh, Bogaerts and Devers logged one-out singles before J.D. Martinez reached on a fielding error that allowed Boston’s fourth run to score. Story then lined an RBI double inside the right field line.

The Rangers broke the shutout with two homers off Garrett Whitlock in the eighth.

Taylor Hearn followed Santana with a strong outing as part of the Rangers’ bullpen game, striking out four over two scoreless innings.