Red Sox on rise ahead of middle game of series vs. Astros 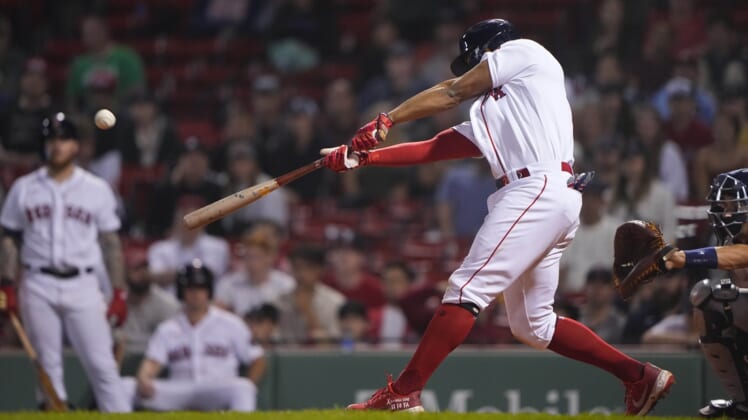 The Boston Red Sox will look to make it back-to-back wins and four out of five when their three-game rematch of last year’s American League Championship Series against the Houston Astros continues on Tuesday night in Boston.

Houston reliever Hector Neris had made 10 consecutive scoreless appearances before he was tagged for three runs in the eighth inning Monday during Boston’s 6-3, series-opening win.

Prior to Monday, Houston had lost just once in a 13-game span. Meanwhile, Boston was coming off a 7-1 loss at Texas after beating the Rangers in back-to-back contests.

“It was big. They’ve been hot and we kind of haven’t,” Red Sox designated hitter J.D. Martinez told NESN following the win over the Astros. “Coming off a good series against Texas, playing against (Houston), we all remember what happened last year. Every time we play them, there’s a little more energy.”

Martinez and Enrique Hernandez each went 2-for-4 while Trevor Story and Xander Bogaerts homered for Boston.

“It seems like he’s seeing the ball well,” Red Sox manager Alex Cora said of Martinez, who extended his hit streak to 17 games. “It started with the walks, and now he’s doing damage.”

Boston’s Nathan Eovaldi (1-1, 3.15 ERA) has pitched well all season, allowing three runs or less in all seven starts. However, the right-hander will look for his first win since April 13 when he takes the mound on Tuesday night.

Four of Eovaldi’s five starts since then have been no-decisions, including his outing at Atlanta on Wednesday during which he struck out six Braves over 6 1/3 innings of three-run ball.

“I definitely take a lot of pride in (going deep into games),” Eovaldi recently told the Eagle-Tribune of North Andover, Mass. “I think that’s every starter’s goal, to go out there and go nine innings. I know there’s the stats the third time through the lineup how much better the batters are handling you. I think it helps that I have the five pitches that I can keep circulating through and keep them off balance.”

The Astros hope to have rookie shortstop Jeremy Pena — who grew up in Rhode Island and played at the University of Maine — back in the lineup before leaving Fenway Park on Wednesday.

Pena hasn’t played since Thursday due to a sore knee, but he worked out in front of coaches and trainers before the series opener in Boston.

“His mom put a little pressure on me,” Houston manager Dusty Baker said before Monday’s game. “His mom asked me, ‘Is Jeremy going to play today? Because we have 1,000 people coming from Rhode Island.'”

Mauricio Dubon, acquired in a Saturday trade to add to the team’s depth, filled in at shortstop for Houston the past two days. He logged his first hit as an Astro on Monday.

Jose Urquidy (2-1, 4.40 ERA) will start for Houston on Tuesday after consecutive no-decisions against the Minnesota Twins and Detroit Tigers. However, he allowed just one run overall in nine innings during those outings.

Urquidy, a right-hander, worked six scoreless innings on May 5 against the Tigers before his Wednesday start was suspended due to severe thunderstorms that arrived in Minneapolis.

Urquidy’s first and only career start against the Red Sox came on May 31, 2021. He fanned nine Boston batters in six innings of three-hit, one-run ball, and he emerged with a win.