Red Sox nip Blue Jays despite only getting three hits 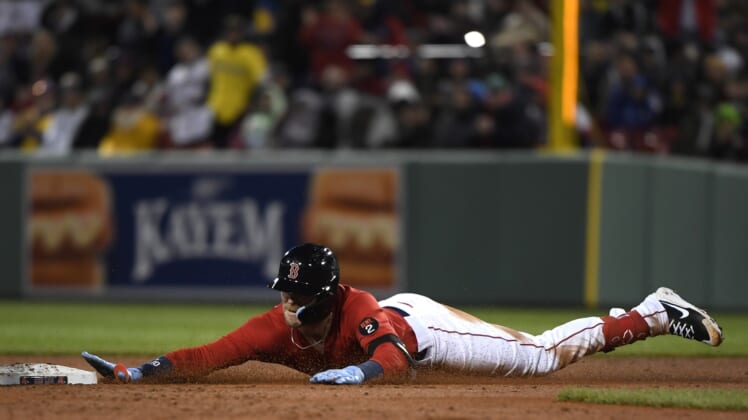 The Boston Red Sox made the most of three hits in edging the visiting Toronto Blue Jays, 2-1, in Tuesday night’s three-game series opener.

Trevor Story delivered a run-scoring double in the third inning, and Connor Wong drove in the deciding run on a seventh-inning sacrifice fly just a day after he was recalled from Triple-A Worcester.

Kike Hernandez and Alex Verdugo also had a hit for Boston, which has won three of its last four games.

Zack Collins went 2-for-4 with a home run to bring in Toronto’s lone run. Vladimir Guerrero Jr. and Alejandro Kirk also had multiple hits for the Blue Jays.

Aside from Collins’ second homer of the season, Red Sox starter Nathan Eovaldi allowed six other hits and struck out six over 4 2/3 innings.

Boston’s bullpen was outstanding again as Matt Strahm, Hansel Robles, Jake Diekman and Garrett Whitlock pitched scoreless ball following Eovaldi’s exit. Robles (1-0) struck out two in 1 2/3 innings to earn the win, while Whitlock nabbed a save with a 1-2-3 ninth.

Toronto’s Yusei Kikuchi was impressive in just his second career start at Fenway Park, allowing just one run on three hits and three walks in five innings. The left-hander struck out three and fielded his position well as he assisted on five putouts.

After the Jays squandered Guerrero’s first-inning single, it didn’t take them long to dent the scoreboard first in the following frame as Collins ripped a solo homer over the bullpens in right-center.

While Eovaldi held the potent Toronto offense scoreless for the remainder of his start, the home team brought in the game-tying run in the third as Hernandez and Story recorded consecutive one-out doubles.

In the seventh, Boston took the lead without the benefit of a hit. Wong lifted a sacrifice fly to deep right that scored Dalbec, who had reached on Blue Jays shortstop Bo Bichette’s second error.