Boston Red Sox’ Eduardo Rodriguez: Will be 100 percent by start of season 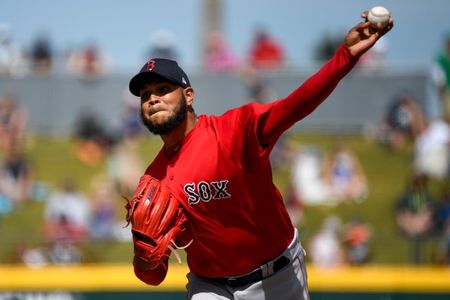 Boston Red Sox left-hander Eduardo Rodriguez said Thursday that he will be fully recovered from a heart issue tied to his COVID-19 battle when the 2021 season commences.

The 27-year-old Rodriguez missed the 2020 season due to his health issues, which included being diagnosed with myocarditis (heart inflammation) in July.

“I feel great,” Rodriguez told MLB Network Radio on SiriusXM. “My workouts are going to start next week, like lifting weights and all that. I’ve been doing bike, throwing a little bit, so I would say I will be 100 percent ready for next season.”

The summer was rough for Rodriguez as the team announced he tested positive for COVID-19 on July 7 and placed him on the injured list eight days later.

Later in the month, he discussed his COVID-19 and myocarditis diagnoses with reporters and described being fearful and feeling like he was “100 years old.” His wife also contracted the coronavirus.

Making it harder was that he was slated to be the ace of the Red Sox after Chris Sale underwent Tommy John surgery and David Price was traded to the Los Angeles Dodgers.

Instead, he watched Boston struggle to a dismal 24-36 record.

“It was hard for me because in the past I’ve been hurt, you know, but I lost like three weeks, one month,” Rodriguez said. “But you know you’re going to play during the season.

“Then it’s just a short season and you’re not going to have the time to play with your teammates and be there. It was really just hard for me sitting at home and watching them play every day. I would say that was the hard part for me.”