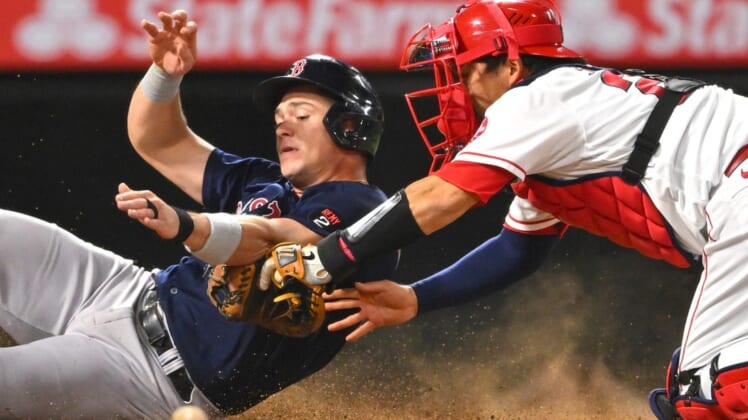 Nathan Eovaldi threw five scoreless innings, Bobby Dalbec drove in the only run of the game with a sixth-inning double, and the Boston Red Sox ran their winning streak to seven games by beating the Los Angeles Angels 1-0 on Wednesday night in Anaheim, Calif.

Eovaldi (4-2) gave up six hits but did not walk a batter, striking out five and making 84 pitches.

The loss for the Angels was their 14th straight, setting a franchise record, including the last two under interim manager Phil Nevin. The Angels matched the Red Sox with seven hits, but were 0-for-4 with runners in scoring position.

During the losing streak, the Angels have scored one run or fewer in six of the 14 games, including being shut out three times.
The Angels were without center fielder Mike Trout, who is day-to-day with a tight left groin.

Angels starter Reid Detmers held the Red Sox scoreless through four innings, but when the Red Sox put runners on second and third with one out in the fifth, he was replaced by Archie Bradley.
Bradley was able to escape without allowing a run by getting Christian Vazquez to hit into a fielder’s choice and striking out J.D. Martinez.

Angels right-hander Jimmy Herget (1-1) relieved Bradley to start the sixth and began the inning by striking out both Xander Bogaerts and Trevor Story. But Herget walked Alex Verdugo before giving up the double to Dalbec, Boston taking a 1-0 lead.

Eovaldi kept the Angels off the scoreboard, but he had to work his way out of jams in the second and third innings when the Angels put multiple runners on base.

In the second inning, Juan Lagares and Brandon Marsh opened the inning with back-to-back singles, but Eovaldi retired the next three hitters in order. In the third inning, singles by Jo Adell and Matt Duffy gave the Angels runners on first and second with two out, but Eovaldi struck out Lagares to end the threat.