Red Sox looking ‘to be better’ against Blue Jays 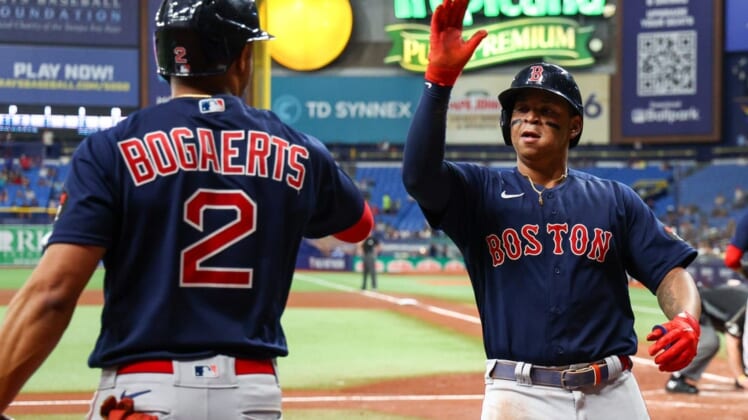 The Boston Red Sox conclude a 17-game stretch against American League East opponents when they begin a three-game home series Friday against the Toronto Blue Jays.

Boston, which entered Thursday two games back in the wild-card standings, will look to make up ground in the race after losing twice against the New York Yankees on the road last weekend.

“Obviously, the vast majority of the games are going to be against the division,” Red Sox manager Alex Cora said. “We knew it was coming into the season. You see the schedule and you play a lot of games at the end. We have to be better. We have to finish games.”

The Red Sox have at least nine games left this season against each of their divisional opponents and will be looking to bounce back after dropping two of three at Toronto from June 27-29.

While the Red Sox were off, it was a busy week for Rafael Devers, Xander Bogaerts and J.D. Martinez, all of whom helped the American League to a ninth consecutive All-Star Game win in Los Angeles.

Devers, who was the AL’s starting third baseman for a second consecutive year, is the first Red Sox player to hit 20 home runs before the All-Star break in back-to-back seasons since Manny Ramirez and David Ortiz. He hit three home runs in his last four games before the break, including two during the series in New York.

“It’s great. It’s just a ‘wow’ experience,” Devers said. “I’m looking at my jersey and it says No. 2 (on the sleeve). … I looked to the side of me and Aaron Judge has four (appearances), and then guys like Clayton Kershaw and (Paul) Goldschmidt have nine.”

The Blue Jays won their last three games during a four-game set against the Kansas City Royals. They are 5-1 after a 1-9 stretch that led to the firing of manager Charlie Montoyo.

“Fifty (wins before the break) is a good number,” interim manager John Schneider said. “When you look at the expectations of this ball club, you can say, ‘OK, we’re getting to where we need to go a little bit.'”

“It’s special to catch him here in the All-Star Game in L.A.,” Kirk said. “Yes, we’ve had some experience together, but nothing like this. … It’s a great relationship between us, like brothers.”

One Blue Jays player who didn’t take part in the festivities was outfielder George Springer, who used the break to rest an elbow injury. He had what Schneider called a scheduled day off last Sunday.

“The rest will be good for him,” Schneider said. “Over the course of the last two weeks or so, he’s been a little unlucky. At this point in the season, rest may be the best thing for him.”

Eovaldi returned from the 15-day injured list (back) and pitched 4 1/3 innings in Boston’s eventual 5-4 extra-innings win at New York on Friday. He allowed three runs on six hits in a no-decision.

Gausman took the loss in his start last Thursday against Kansas City, allowing two runs in six innings. He has allowed just one earned run in 21 innings over three starts against Boston this season.