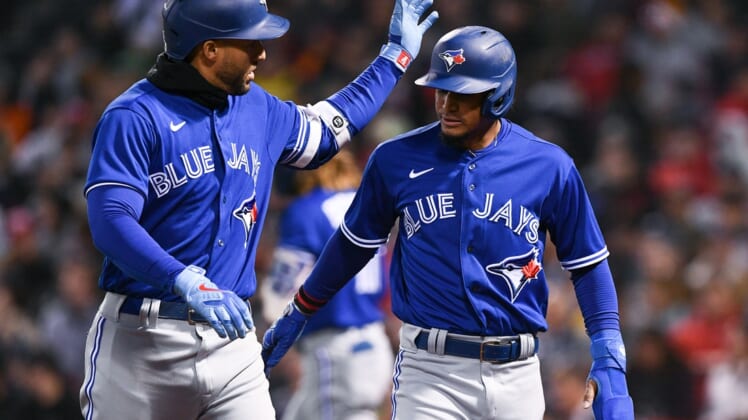 The Toronto Blue Jays and host Boston Red Sox split the first two games of their series, and now there’s a chance both clubs could be without an important regular in the rubber match on Thursday afternoon.

Toronto center fielder George Springer exited in the sixth inning of the Blue Jays’ 6-1 win on Wednesday after being struck by a Phillips Valdez pitch. Springer has a right forearm contusion, and he was due to be re-evaluated to assess his condition.

Boston designated hitter J.D. Martinez, who had two hits in his only two at-bats on Wednesday, was lifted in the third inning due to left adductor tightness. His status also had yet to be determined.

The Red Sox received another scare when Trevor Story was plunked in the helmet by a Jose Berrios pitch. The 93 mph fastball hit the protective flap on the left side of Story’s helmet, and the second baseman remained in the game.

In his latest outing, Houck tossed 5 2/3 strong innings in a 4-0 win over the Minnesota Twins on Saturday. The 25-year-old has not been involved in a decision in his career against the Blue Jays, but he has been effective, posting a 2.35 ERA and 13 strikeouts against just three walks in 7 2/3 innings over two starts.

“Timing is a big (thing) for him,” Red Sox pitching coach Dave Bush told the Red Sox’s NESN pregame show. “A lot of work is just the timing of his delivery.”

The Red Sox will have to adjust Houck’s schedule after Thursday because he is not vaccinated. He won’t be able to pitch in Toronto for what normally would be his next turn on April 26, as Canada isn’t allowing unvaccinated visitors to cross the border.

COVID-19-related issues have impacted the Red Sox. The club did receive good news on Wednesday when Christian Vazquez, their regular catcher, was restated from the COVID-19 injured list. Vazquez last played on Monday, when he hit his first homer of the season against the Twins.

Gausman is seeking his first win with the Blue Jays after signing a five-year, $110 million contract in the offseason. The 31-year-old enjoyed a career year with the San Francisco Giants in 2021, placing sixth in the National League Cy Young Award voting after going 14-6 with a 2.81 ERA.

He is no stranger to facing the Red Sox.

“I feel like I’m right where I need to be,” Gausman said after his last start, when he fanned nine while allowing two runs in 5 2/3 innings during a loss to the New York Yankees on April 14. “The closer we can get to 100 (pitches), the more we can give those guys a break out there (in the bullpen).”