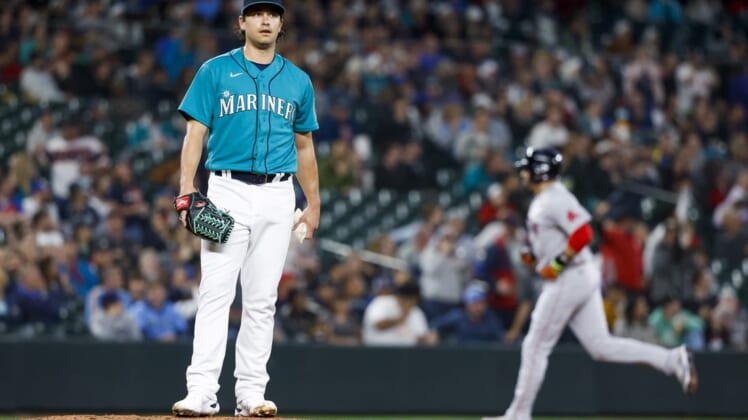 Bobby Dalbec, a Seattle native, homered leading off the seventh inning to break a tie and lead the Boston Red Sox to a 4-3 victory over the host Seattle Mariners on Friday night.

J.D. Martinez also went deep for the Red Sox, who have won eight of their past nine games.

Jesse Winker homered for Seattle, which is 0-5 against Boston this season.

Dalbec greeted reliever Andres Munoz (1-3) by hitting a 2-1 pitch over the left field wall for his fourth homer of the season, putting the Red Sox up 3-2.

The Red Sox tacked on another run in the inning. Rob Refsnyder was hit by a pitch, advanced to third on Rafael Devers’ single to center and scored as Martinez grounded into a double play.

That ended up being an important insurance run as Seattle scored in the eighth. With two outs, Abraham Toro singled to center, advanced to second on Luis Torrens’ single and scored on Cal Raleigh’s bouncer up the middle that went off the glove of second baseman Trevor Story.

Jake Diekman (2-0) got the victory after throwing one scoreless inning in relief. Tanner Houck earned his first save of the season, getting Adam Frazier to line out to Story with runners at second and third to end it.

The Red Sox scored in the first. With one out, Devers walked, and he scored an out later on a double down the right field line by Xander Bogaerts. Two more walks loaded the bases, but Marco Gonzales, who faced seven batters and threw 44 pitches in the inning, struck out Christian Vazquez on a 3-2 pitch to get out of the jam.

The Red Sox made it 2-0 in the third when Martinez led off with a solo shot to left-center field on a 3-2 count. It was his sixth homer of the season.

The Mariners tied it in the fifth. Torrens led off with a double into right-center and, an out later, Winker hit a towering, two-run shot down the right field line, his fourth of the season.