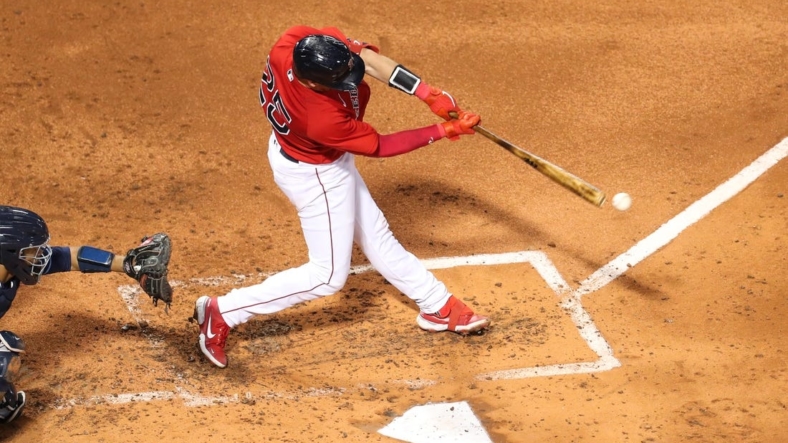 The Boston Red Sox put up crooked numbers in each of the middle innings, totaled 16 hits and held on for Friday’s 9-8 win over the visiting Tampa Bay Rays.

Boston trailed 4-1 after three innings before scoring two runs in both the fourth and fifth, three on a Xander Bogaerts homer in the sixth, and another in the seventh.

Michael Wacha (9-1) struck out six and allowed four runs on five hits over six innings, earning his sixth win in as many decisions. Garrett Whitlock saved the win with a 1-2-3 ninth.

Yandy Diaz, Ji-Man Choi and Jose Siri homered for Tampa Bay, which had won its previous six games. Siri cut Boston’s lead to one with a three-run blast in the eighth.

JT Chargois allowed a hit and struck out one as a first-inning opener. Left-hander Ryan Yarbrough (1-8) gave up five runs on eight hits in 3 1/3 innings.

The Rays wasted no time scoring as Diaz crushed Wacha’s first pitch over the Green Monster.

In the second inning, Choi hit a two-out, two-run shot to right-center field to extend Tampa’s lead to 3-0. It scored Siri who doubled two batters earlier.

Plawecki found a hole on the left side for a single to get Boston on the board in the bottom of the frame. Christian Arroyo’s leadoff double and Hernandez’s one-out knock to left set up the RBI chance.

Tampa loaded the bases with nobody out before re-establishing its three-run lead on a Harold Ramirez sacrifice fly in the third.

The Red Sox tied the game and surged ahead as Shawn Armstrong relieved Yarbrough with one out in the fifth. Hernandez grounded a game-tying single before Plawecki’s double to left made it 5-4.

The sixth was Boston’s third straight crooked number inning, as Bogaerts left the yard after Verdugo walked and Martinez singled.

David Peralta’s single to center and Siri’s homer brought in four Rays runs before the first out of the eighth. Boston’s Matt Barnes then retired three straight batters to keep it a one-run game.