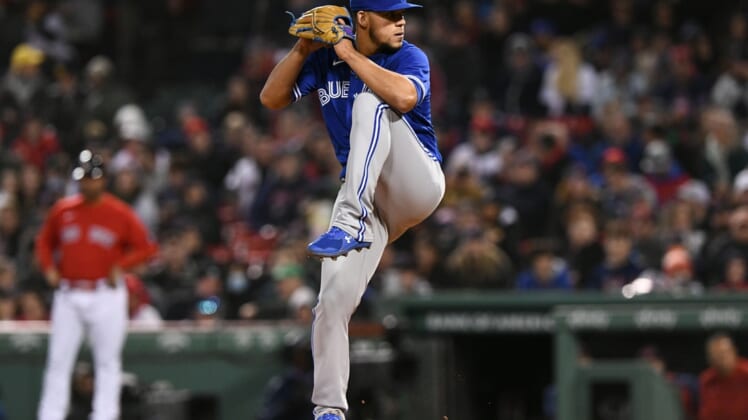 The Boston Red Sox will try to reverse the result of last week’s series between the teams when they visit the Toronto Blue Jays for a four-game set that opens Monday night.

The Blue Jays won two of three games from the Red Sox at Fenway Park as part of their 4-2 road trip that finished with an 8-7 loss in 10 innings to the Houston Astros on Sunday.

After dropping the series against Toronto, the Red Sox lost two of three to the Tampa Bay Rays at St. Petersburg, Fla., where they opened a 10-game road trip.

“Give those guys credit,” said Boston starter Rich Hill, who allowed four hits and three walks in four runless innings on Sunday. “We’re in a tough division and it’s going to be a tough division all year long.

“Obviously, we have work to do. Going up to Toronto is not going to be an easy series either, but we’re fully capable of going on a nice run here.”

Red Sox starting pitcher Tanner Houck, who will not make the trip to Toronto because he has not been vaccinated for COVID-19, was used in relief in the 5-2 loss to the Rays on Sunday. Houck struck out two in 1 2/3 runless innings.

Phillips Valdez took the loss after being charged with three runs in one-third of an inning after hitting two batters with pitches and walking another. Ryan Brasier followed by allowing a two-run double.

Red Sox manager Alex Cora was not with the team in the series against the Rays because he tested positive for COVID-19.

The Blue Jays are starting a 10-game homestand with the series against the American League East rival Red Sox.

Eovaldi allowed one run in 4 2/3 innings Tuesday against Toronto and did not factor in the decision. He gave up seven hits and one walk while striking out six in the game won 2-1 by Boston. In 10 career games (nine starts), Eovaldi is 1-2 with a 4.33 ERA against Toronto.

Eovaldi has not allowed more than two walks in 22 straight regular-season starts to match his career best.

Berrios earned the win on Wednesday at Boston when he allowed one run, eight hits and one walk while striking out six in six innings. Toronto won 6-1. In eight career starts against Boston, he is 1-5 with a 4.05 ERA.

The Blue Jays came close to sweeping the Astros in a tight series after coming back from a 5-2 deficit. Toronto tied the game on a three-run homer by Zack Collins in the sixth and took the lead on Santiago Espinal’s double in the seventh.

After Houston tied the game in the bottom of the seventh, Toronto regained the lead in the top of the 10th on Lourdes Gurriel Jr.’s double.

In the bottom of the 10th, however, Jordan Romano allowed Jeremy Pena’s two-run, walkoff home run.

Romano had converted a franchise-record 31 consecutive save opportunities – eight this season – entering the game.

“We had a good road trip,” Blue Jays manager Charlie Montoyo said. “It’s fine. We’re not going to win every game. We came back and we were there until the end and we were closing the game.”