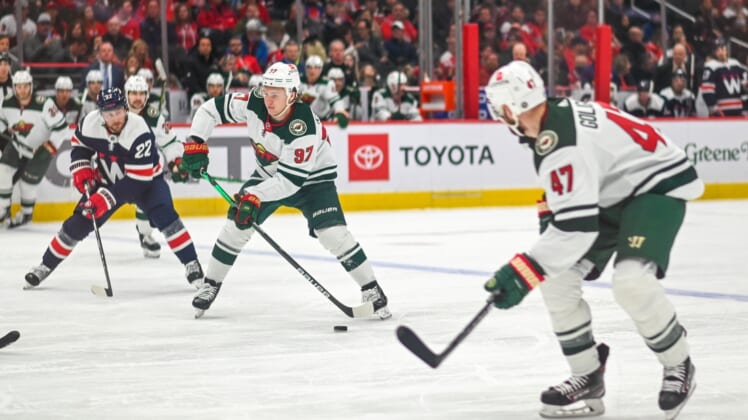 Joel Eriksson Ek scored two goals and set up another and Jordan Greenway notched a career-high three assists to lift the visiting Minnesota Wild to a 5-1 victory over the Washington Capitals on Sunday.

Marcus Foligno collected a goal and an assist and Tyson Jost and Nicolas Deslauriers also tallied as the Wild (43-20-5, 91 points) extended their point streak to 10 games (9-0-1).

Cam Talbot made 25 saves for Minnesota, which improved to 22-5-4 against Eastern Conference representatives after completing a two-game season sweep of the Capitals. The Wild skated to a 3-2 shootout victory over Washington on Jan. 8.

Garnet Hathaway scored in the third period and Vitek Vanecek yielded four goals on 18 shots for the Capitals (37-22-10, 84 points), who have lost 10 of their last 14 home games.

Minnesota bolted out of the blocks to take an early 2-0 lead after scoring on its first two shots of the game.

Stationed behind his own net, defenseman Alex Goligoski sent a stretch pass that Greenway deflected ahead to Eriksson Ek. The Swede beat Vanecek between the pads on a partial breakaway just 36 seconds into the game.

Jost doubled the advantage just 61 seconds later after sidestepping Washington’s Nicklas Backstrom in the neutral zone before beating Vanecek from the left circle.

Eriksson Ek recorded his fourth career multi-goal performance after cleaning up a rebound of Greenway’s shot to give Minnesota a 3-0 lead with 6:53 left in the second period. The goal was Eriksson Ek’s career-high 21st of the season.

The Wild kept the pressure on after cashing in on a turnover just 30 seconds into the third period. Foligno wired a shot from the high slot past Vanecek for his 20th goal of the season and first since March 8.

Hathaway put Washington on the scoreboard after deflecting captain Alex Ovechkin’s shot past Talbot at 10:28 of the third period. Hathaway’s goal was his 11th of the season and first since Feb. 17.

Ovechkin’s assist moved him into 21st place in NHL history with 1,399 points, one more than Hall of Famer Jari Kurri.

Deslauriers scored into an empty net with 2:45 to play to seal the win.