Red-hot Texas A&M tangles with No. 15 Arkansas in SEC semis 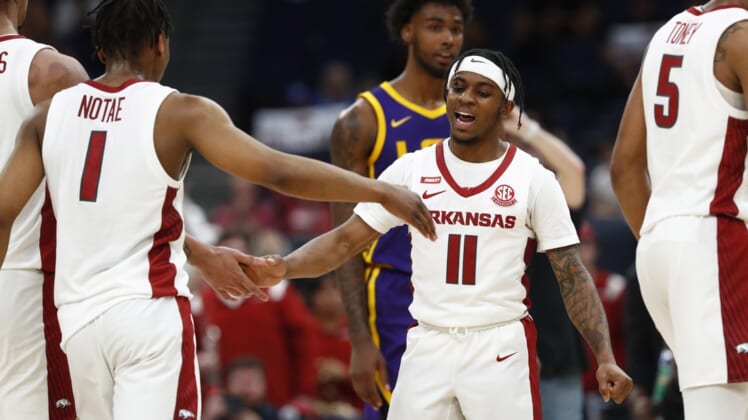 One day after defeating fourth-ranked Auburn, Texas A&M takes aim at No. 15 Arkansas in Saturday’s semifinals of the Southeastern Conference tournament at Tampa.

The eighth-seeded Aggies are on the NCAA Tournament bubble, and nothing helps better than beating a team such as Auburn, the top seed in this tourney and a possible No. 1 seed for March Madness.

Texas A&M led by as many as 20 points on Friday and fought off a late charge for a 67-62 victory.

Now the task is dealing with fourth-seeded Arkansas, which defeated fifth-seeded LSU 79-67 in its quarterfinal matchup.

This time, the Aggies are under pressure. However, they have won six straight games and seven of their past eight.

The Aggies are brimming with confidence, and the mood is much different than the stretch from mid-January to mid-February when they dropped eight straight games.

“I think the resilience of this team and the fight that this team has and everything that we have been through earlier in the season prepared us for everything that’s happening now,” guard Tyrece Radford said. “I don’t think we’re coming into any game thinking that we’re going to lose or anything like that. Our heads are held high.”

Radford made a career-high five 3-pointers while recording 19 points and eight rebounds in the upset over Auburn. The Aggies held a 53-33 lead with just over 11 minutes to play before weathering a strong comeback bid by Auburn.

It was the Aggies’ second straight win in the tournament — they beat Florida 83-80 in overtime in Thursday’s second round — and they may need to win twice more and claim the SEC’s automatic berth to avoid any Selection Sunday drama.

Texas A&M coach Buzz Williams said his team needs to be evaluated on more than athletic ability and flashy results.

“I don’t know where you would rank us from a talent perspective in the SEC, but it would be in the bottom half,” Williams said. “I just don’t know that you can evaluate the heart and the character and the fabric and the fight.”

Arkansas would like to avoid an upset so it can bolster its NCAA seeding. The Razorbacks have won 15 of their past 17 games and figure to be a top-four seed.

Arkansas guard JD Notae averaged 24 points in the two games against Texas A&M. He scored 19 points in the win over LSU while Au’Diese Toney led the way with a season-high 22 points to go with 10 rebounds.

Lykes added 18 points as Arkansas defeated the Tigers for the third time this season.

Despite the Razorbacks’ extended run of success, coach Eric Musselman is concerned about the desperate Aggies.

“They got hot at the end of the year,” Musselman said. “They’ve done a phenomenal job of late of playing really, really good basketball. We know we’re playing a team that’s playing with great confidence.

“We’re playing against a team that is fighting for their NCAA lives (on Saturday), and so we’re going to get their best effort because they’re really, really competitive and a tough-minded team.”