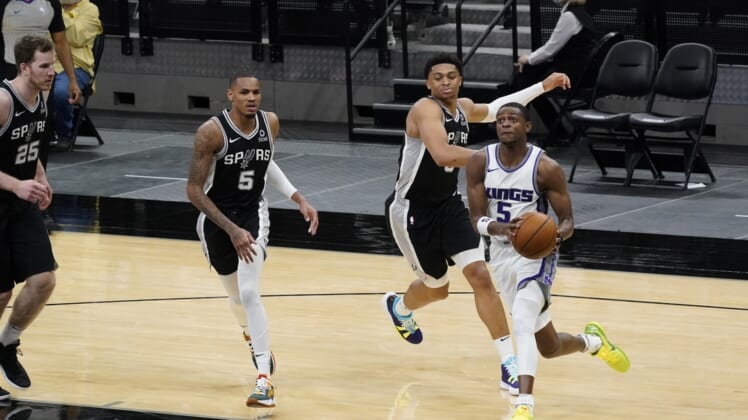 The Sacramento Kings embark on a glamorous — but certainly not ideal for a playoff contender — two-game heavyweight homestand when they host the Los Angeles Lakers on Friday night.

The game pits, as you might expect, an upward-trending team that’s won five of six against an in-state rival that’s dropped five of seven.

But it’s Sacramento that’s the hotter of the two in this case, playing an improved brand of ball the Kings hope to demonstrate not only to the defending NBA champions but to another of the league’s top teams — the Milwaukee Bucks — on Saturday night.

“We’re all here to help change the Kings’ culture, to get the Kings back to the playoffs,” rookie Tyrese Haliburton said earlier this week. “If we really want to do what we say we want to and change things around here, then this has got to be consistent. We’re doing a really good job right now.”

The fun was temporarily paused Wednesday when the Kings lost the second of a two-game set with the Spurs, watching a five-game winning streak end in a 120-106 road defeat.

Now Sacramento, which hasn’t made the playoffs since 2006, must avoid something that occurred earlier this season. That’s when, just when things were looking up with seven wins in eight games, the Kings plummeted into a nine-game losing streak that landed them back among the bottom teams in the West.

If Sacramento is to avoid the snowball effect this time around, it will have to do something it already has done this season — beat the Lakers.

The first surprise came almost a month ago, also in Sacramento, when the Kings took advantage of the absence of LeBron James and Anthony Davis to outlast the Lakers 123-120. Harrison Barnes’ 20 points and go-ahead layup with 30.1 seconds remaining led that win.

James sat out that game with a sore left ankle on the eve of the All-Star Game. This time around, his ankle injury is much more serious, as he has missed six straight and could be out the entire month of April with a sprain.

The Lakers have floundered with both James and Davis off the court. They’ve gone 2-4 since James joined his star teammate on the sideline last month and 9-11 since Davis went out with a calf injury in February.

The Lakers are coming off a 2-2 homestand, with the wins coming against Cleveland and Orlando. The stretch began with an eight-point loss to Philadelphia and ended Wednesday with a 15-point loss to the Bucks.

The latter defeat was more painful than the final score might indicate. Center Andre Drummond, playing for the first time since joining the Lakers after a Cleveland buyout, and having seen no action since Feb. 12, had to leave the game with a toe injury that had him scratching his head afterward.

“What do you do for a toe? I don’t know,” he said. “I’m not really sure what to do. I’m just going to talk to the training staff and find out what’s the best thing to do to get back as quick as possible.”

X-rays were negative, but Drummond lost a toenail in a first-quarter accidental run-in with Bucks big man Brook Lopez. He is unlikely to play against the Kings, but the Lakers would still like to consider him a game-time decision.

Montrezl Harrell had 19 points in the loss to the Bucks. He has been one of the few bright spots during the Lakers’ skid down the Western standings, having averaged 20.7 points on 65% shooting in his past seven games.