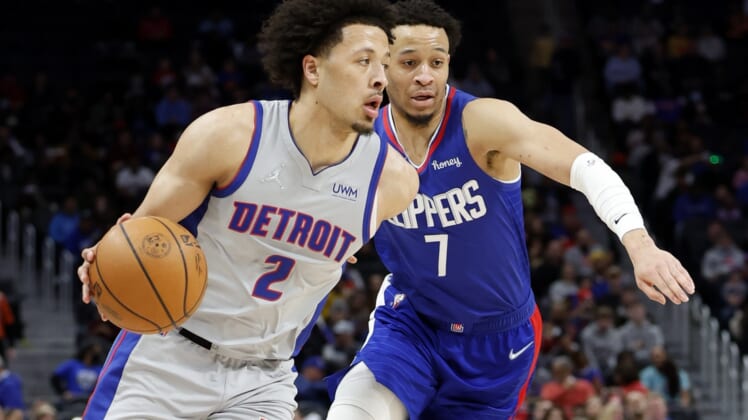 Detroit Pistons star Cade Cunningham is making a run at NBA Rookie of the Year, thanks to a current string of seven straight games of scoring at least 20 points.

That matches the franchise record for rookies set by Kelly Tripucka 40 years ago.

On Tuesday night, Cunningham will try to break that record when his Pistons visit the Miami Heat.

Tuesday’s matchup, on paper, looks ugly as Miami (45-24) has the best record in the Eastern Conference while Detroit (18-50) has one of the worst records in the NBA.

But while all of this looks like a mismatch, talents such as Cunningham give the Pistons a chance.

On Sunday, Cunningham had a near triple-double — 23 points, a game-high 10 assists and a team-high nine rebounds — in a 106-102 loss to the Los Angeles Clippers.

The Pistons led by 18 points in the second quarter, but they couldn’t hold that advantage, losing their third straight game.

“We haven’t gotten there yet,” Pistons coach Dwane Casey said when asked about the arrival of his young team. “But we will.”

There’s no question the Pistons have improved lately. They endured an eight-game losing streak in February. But since Feb. 16, they are 6-5.

Meanwhile, Miami is 13-4 in its past 17 games. The Heat have dealt rather seamlessly with several absences, mostly for injuries but some for illnesses and other issues.

Jimmy Butler, who leads the team in scoring (21.4), has missed two of Miami’s past three games. He missed one game during that stretch for a sinus issue. Then he missed Saturday’s loss to the Minnesota Timberwolves due to a toe injury.

Butler, who has missed 22 games this season, gets to the foul line more than any other Heat player, increasing his value as a late-game closer.

“We can’t duplicate what Jimmy does,” Heat point guard Kyle Lowry said. “When Jimmy’s out, we shoot more threes and attack the rim less. We go to the foul line less. You can’t make up for what that guy brings, but we just try to win the game.”

Miami also rested two-time All-Star Victor Oladipo for the Minnesota game. He has been injured for much of the past three years, and his workload has been heavily managed.

Oladipo is expected to play against Detroit, but Caleb Martin — an explosive leaper who is a valuable member of the Heat’s bench — is questionable due to a knee injury.

Besides Butler and Lowry (team-high 7.9 assists), the other key Heat players are Bam Adebayo and Tyler Herro.