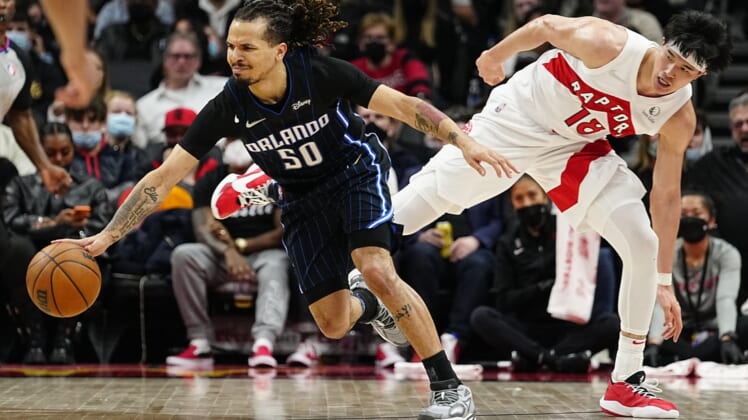 One of the Eastern Conference’s hottest teams visits the Orlando Magic on Friday night.

The Toronto Raptors, winners of 10 of their past 12 games, concluded a 4-0 homestand with a 125-102 victory over Minnesota on Wednesday. Pascal Siakam logged a career-high 13 assists as part of his second career triple-double.

The Raptors (44-32) not only ended the day with the same overall record as the fifth-seeded Chicago Bulls, but they also moved two games ahead of seventh-place Cleveland.

Siakam’s stat line against Minnesota — which led 40-23 in the second quarter before the Raptors ended the first half on a 39-20 run — included 12 points, 10 rebounds and six of Toronto’s 17 total turnovers. The Raptors also made it four straight games with six or more players scoring in double figures.

Gary Trent Jr. poured in 29 points, making 6-of-8 3-pointers. OG Anunoby also went 4-for-4 from deep and scored 22 points in his fourth game since coming off the injured list with a fractured finger.

“I think we have everyone kind of back, you know, everyone getting their rhythm back,” Siakam said postgame Wednesday. “OG — it was great to see him back — Gary played well today. So, I think that it’s great to have everybody. We’re going to need everyone.”

Toronto split the first two games with Orlando (20-57) this season.

The Raptors squeaked out a 110-109 home agianst the Magic on Oct. 27. Orlando returned to Toronto on March 4 and had seven players score in double figures to win 103-97 and break a nine-game losing streak against the Raptors.

The Magic have lost 28 of their past 34 overall matchups with Toronto, and they’ll play four of their final five regular-season games at home, where they are 10-27. Head coach Jamahl Mosley’s club is on a four-game losing streak following Wednesday’s 127-110 setback at Washington.

Maryland native Markelle Fultz played 21 minutes and scored 19 points — both season-highs — on 7-of-14 shooting against the Wizards. The former No. 1 draft pick has appeared in 13 games this season after a long recovery from a left ACL tear, and while Orlando continues to be cautious with the playmaking guard, Fultz said he believes he’s making progress.

“Just trying to get to my spots,” Fultz said after Washington swept the season series with the Magic. “Something that, you know, as the season has been going on I want to continue to be aggressive. And continue to try to work on the things that I need to work on to try to help myself and this team.”

Orlando’s Franz Wagner, who like Barnes is a prime candidate for Rookie of the Year honors, scored 13 of his team-high 28 points in the first quarter on Wednesday.